Cats must win four to get to NCAA tourney 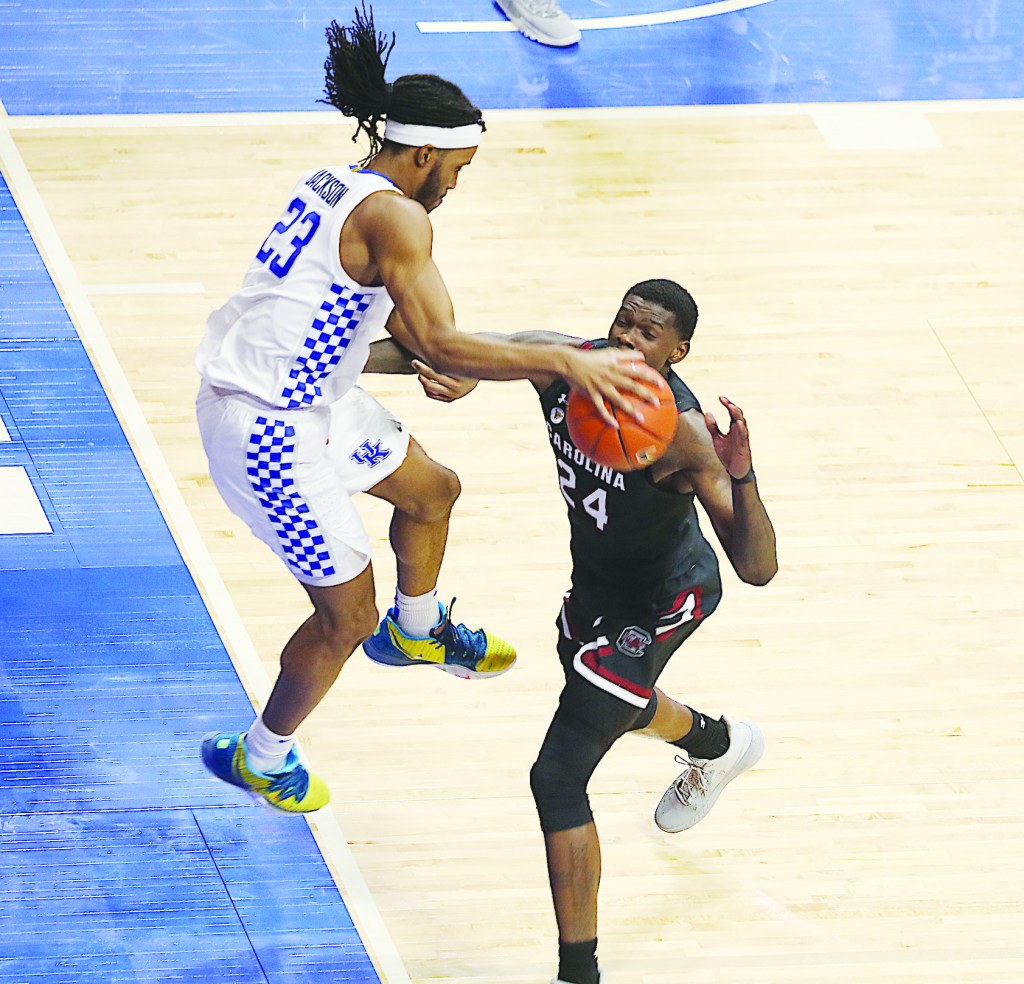 Isaiah Jackson battles to save the ball in bouncs against South Carolina. - SEC Photo

Can Kentucky do something it has not done since 1952 and win four straight games to win the Southeastern Conference Tournament?

In fairness, UK has not been in a position where it had to win four straight to win the tournament often. Kentucky has not opened the tournament prior to the quarterfinals since the tourney expanded in 2013 but will Thursday when it plays Mississippi State at noon. If the Cats win, they would play SEC regular-season champion Alabama Friday at noon. If that’s not enough, Florida and Tennessee are also both in UK’s half of the bracket and one could be waiting in the semifinals Saturday if UK advances.

Kentucky (9-15) won four of its last six games and is coming off a 92-68 victory over South Carolina Saturday.

“If there is any chance to win four in a row, they have to play fast and they have to fight,” ESPN analyst Jimmy Dykes said. “I can just tell you they are a much better ball club now than earlier in the season. You have seen the growth defensively and the ball is moving much better.”

“They have to run great stuff and execute it because they don’t have a guard who can just blow by you.”

Kentucky has to win the SEC Tournament or it will be left out of the NCAA Tournament for the first time since 2013.

“I’m not thinking they are looking forward to seeing my team, especially coming off this kind of game (against South Carolina),” Calipari said Saturday. “It’s one game, four times. One game.”

Dykes believes the biggest factors for UK’s success could be how much BJ Boston and Isaiah Jackson “grow up” in Nashville during the tourney.

“I think one thing Boston has learned is how hard you have to go all the time to get yourself open,” Dykes said.

He leads UK in scoring at 12 points per game and had 21 points with a season-high six 3-pointers against South Carolina. Overall, though, he’s shooting just 36 percent from the field and has taken 282 shots — 54 more than anyone else on the team.

Jackson is averaging 8.5 points and 6.8 rebounds per game and leads the team with 63 blocks. He’s shooting 54.2 percent from the field and seemed to show against South Carolina that he is understanding the importance of staying out of foul trouble.

Kentucky has not won four straight games all season. It has had two three-game win streaks but no more. Most of UK’s 15 losses were games the Cats had chances to win but failed to close out games in the final four minutes.

“The question I have in close games is where are you going with the ball with two minutes left,” Dykes said.

The ESPN analyst said he asked Calipari that question and the UK coach told him he had no idea and would have to go with a “gut call” based on a particular game.

“That is not a comfort spot to be in going into the conference tournament,” Dykes said.

Calipari confirmed after Saturday’s win that he did not know where he would go to “stop the bleeding” late in a game in the conference tournament.

Kentucky will need a lot of players to go “crazy” at the SEC tourney in Nashville to win but at least UK is coming off its biggest SEC win of the season.

“It is all about Kentucky and Cal convincing his guys we finally have it whether you have it or not,” Dykes said. “Convince them they have found their groove.

“They have played really well at times lately. The ball moved, they guarded (against South Carolina). This is a selling point now for Calipari to his guys.”