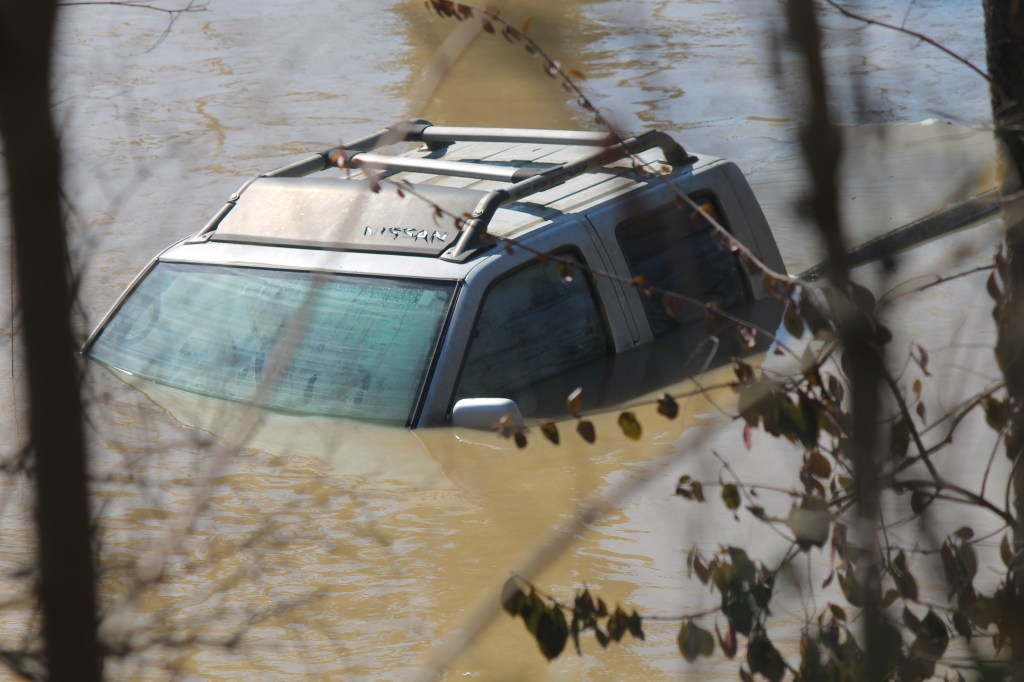 An SUV was under water at the Kentucky River last week. (Photo by Randy Patrick)

The Clark County Fiscal Court quickly allocated $75,000 for disposal and cleanup efforts from recent flooding, but no action was taken on a proposed small business relief plan.

Magistrate Daniel Konstantopoulos made the proposal in light of the continuing clean up from last week’s flooding, particularly along the Kentucky River near the Clark-Madison county line.

“They’re moving all their personal items that’s a complete loss close to the road,” Konstantopoulos said. The county road department has been working to remove the debris and transport it for disposal, which is creating an additional expense for the county.

The magistrates unanimously approved the $75,000, and would decide where the money would be moved within the county budget later.

Later in Wednesday’s meeting, the court discussed whether to implement a small business relief program to local businesses affected by the COVID-19 restrictions or closure orders implemented a year ago.

In February, the City of Winchester approved a total of $24,700 in payments to 24 local businesses within the city limits after going through an application process.

Clark County Judge-Executive Chris Pace offered an identical plan to the fiscal court members Wednesday, but no motions were made. Pace suggested capping the program at $20,000, while not knowing how many businesses might be eligible.

The city’s plan allocated funds for businesses that were operating and had a physical location prior to March 1, 2020. Home-based businesses and franchise-related business were not eligible.

Magistrate Chris Davis questioned why landlords were not eligible under the proposed plan.

“In my opinion, that group of business owners has been one of the most burdened in the last year,” Davis said, citing moratoriums on evictions and emergency orders. “For some reasons, landlords were expected to eat (the financial loss). I would be remiss if we didn’t include some landlord assistance.”

Konstantopoulos suggested that any business which received Payroll Protection Plan funds be ineligible as well.

Others wondered whether it would make any meaningful impact at all.

“It seems like a good idea,” Magistrate Greg Elkins said. “I just don’t know how beneficial this will be and to whom. I think we need to think about this before we use tax dollars.”

“It seems like a drop in the bucket,” Magistrate Joe Graham said.

The court also approved an amended engineering service proposal with Palmer Engineering to include installing sewer line along Rockwell Road to the Yorktowne Mobile Home Park. Davis said The sewer package treatment plant in that area is failing and needs to be replaced.

Pace said the county already received a proposal from Palmer about installing sewer lines along U.S. 60, but adding Rockwell would add another $3,000 to the cost.

Davis said Yorktowne’s treatment system was installed in the 1970s.

“It’s in pretty bad shape,” he said. “It does not operate as it should. If it does (fail), we’ve got 190 property owners who no longer have sanitary sewer access.”

The matter was approved 5-1 with Magistrate Travis Thompson voting no. He said other property owners along that route spent their own money for sewer lines to be installed, and would be paid back through a privilege fee agreement as the property in developed. Thompson said he believed it was inappropriate to use tax funds when private residents spent their money for sewer already.

• noted the 2020 fee account settlements from the sheriff’s office and county clerk’s office.

• noted the indigent burials of Clifford Willoughby and Jackie Hisle.

• hired Nathan Jent as a heavy equipment operator for the county road department.

• approved an order to surplus a dump truck at the road department.

• approved an order to purchase a wood chipper for the road department.

• approved the first reading of an ordinance to rezone 26 acres on Colby Road from agricultural to single-family residential.