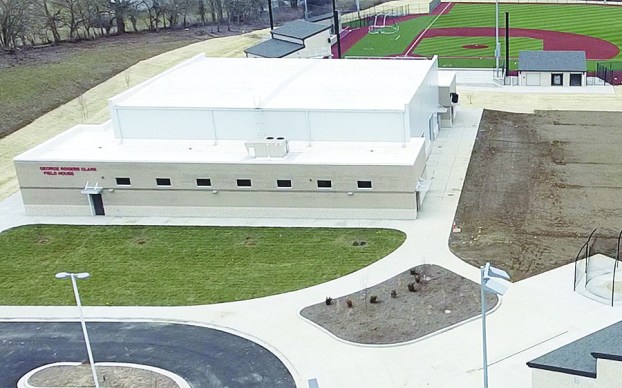 Anyone who plays a spring sport can attest to the nightmare that is fall and winter conditioning.

I am currently going on my 5th year as a GRC Softball player, so I speak from experience when I say that the pre-season is dreadful.

My team has always been thankful for the field house we have at Cardinal Heights up on the hill behind Campbell Junior High, but it has its fair share of flaws.

There is a constant fight of getting everything done with only one batting cage, and whatever temperature it is outside seems to only be amplified inside.

Since the Cardinal Heights field house isn’t big enough to do many work outs, and scheduling conflicts with the middle school team were inevitable, we often found ourselves confined within the walls of whatever elementary school gym was available at the time, which also proved to have its limitations.

Every year was the same song and dance, until this year. As of the week of Jan. 11, the field house at the new athletic complex has been made available to the softball team as well as many other sports.

Covid-19 has set back our conditionings by several months, but the new field house is allowing us to make up for some lost time.

The four batting cages that raise and lower according to our need allow practice to flow more efficiently, giving us the ability to use the most of our scheduled time for that day.

With the addition of new turf fields for both softball and baseball, the turf floors on the inside allow fielders to become better acclimated to how the ball might bounce differently from the dirt fields we are used to in a game.

As a senior, I am more than excited to experience the curtain call of my GRC softball career on such an awesome field.

I only wish that I was a few years younger so I could play on it for longer than just one season.

Having such a versatile indoor facility is a huge advantage in not only our district, but also our region.

As warmer weather approaches Kentucky, we are able to get outside on our new field.

We’ve only been on it a handful of times, but my anticipation for our first home game is growing stronger with each practice.

When that day comes, my team and I will be able to experience together another amazing opportunity that has fallen into our hands.

In the meantime, we will continue to work hard in order to proudly represent GRC at our new athletic complex.

BY LARRY VAUGHT Vaught’s Views Olivier Sarr’s season at Kentucky may not have gone the way he envisioned it when... read more