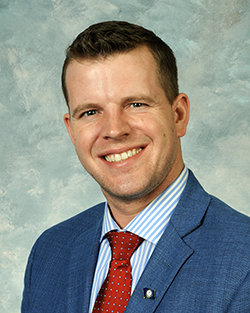 FRANKFORT, Ky. (KT) – Legislation to increase penalties for those convicted of producing child pornography is one step closer to final passage.

State Rep. Derek Lewis, R-London, the sponsor of House Bill 254, appeared before the Senate Judiciary Committee on Thursday, to speak on his measure.

“Currently, it’s a class “D” felony across the board, regardless of the age of the victim,” he testified.  “What this would do, if the minor in the pornographic material is under the age of 12, it would be a class “C” felony.”

Repeat offenders convicted of distributing such material would be guilty of a class “B” felony.

In Kentucky, Class D felonies are punishable by 1-5 years in prison, class C felonies carry a 5-10 year sentence, and Class B felonies 10-20 years.

Heather Wages of the Attorney General’s office told the panel, “There are people who prey on kids for this material, and they have heinous intentions.  We have to do a better job.  They did something like this in Florida, and they saw demand drop for this type of cybercrime.”

Senate Judiciary Committee Chairman Whitney Westerfield, R-Crofton, said he fully supports the bill.  “I could stand it being an A or a B felony, in my opinion.  That’s a particularly evil thing, so this is the least we could do.”

With very little discussion, the committee unanimously approved the bill, which now heads to the Senate floor, where if adopted would then head to the Governor’s office for his signature.

By HEATHER CHAPMAN The Rural Blog Postmaster General Louis DeJoy promised a House subcommittee that he would not close small... read more