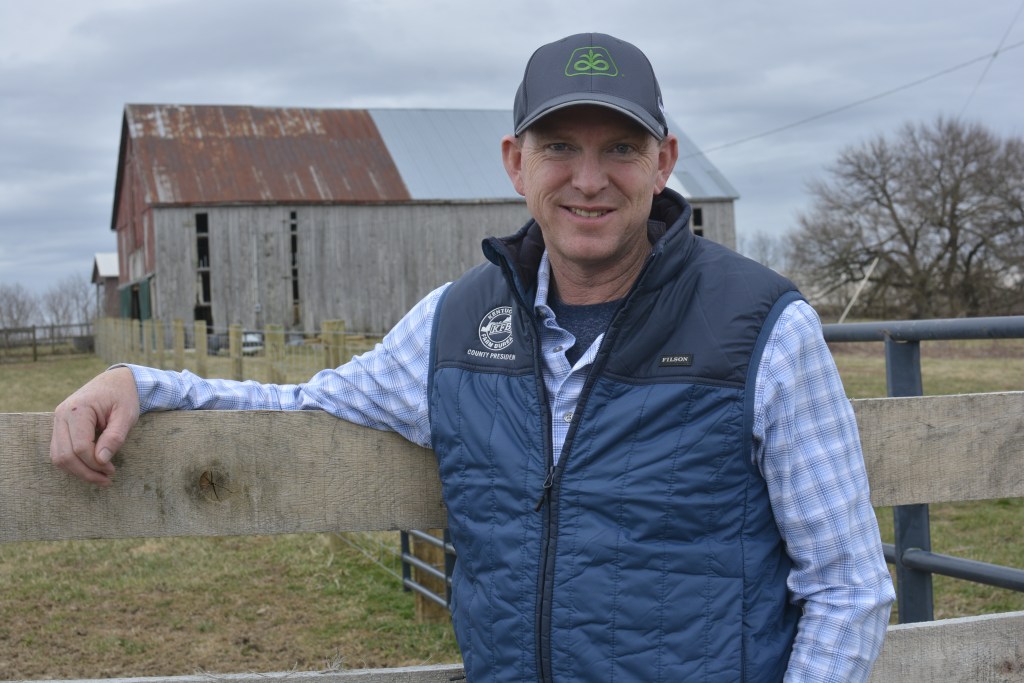 These are unprecedented times for farm families, but despite the challenges of the COVID-19 pandemic and its effects on the economy, Kentucky farmers are still working hard to put food on our tables, and they want others to know.

Last March, Kentucky Farm Bureau launched its #StillFarming campaign to make the public aware of how farmers are coping with those challenges in order to continue to do what they love and provide one of the most essential services.

Drew Graham, KFB’s executive vice president, and Thadd Taylor are Clark County farmers who are part of that advocacy initiative.

Taylor, who will be 50 this summer, is a fourth-generation farmer whose family raises beef cattle, soybeans and grains on Becknerville Road, where his family has always farmed.

He is also an independent distributor for Pioneer Seeds.

“Farming is in your blood,” Taylor said. If “you’re born into it, you love it.”

“It’s very rewarding work. Times can be challenging, but we’re so well diversified that we can make things work,” he said.

The Taylors raise beef cattle and grow corn and soybeans. They also used to grow burley tobacco, but he grew his last crop the year after the federal buyout of 2005.

Today his son Chase, 21, helps him on the farm when he’s home from college in the summer, and his daughter, Paige, 24, likes to ride horses on the farm. His wife, Melissa, who works for Boone Contracting in Lexington, handles most of the bookkeeping. Thadd does a little bit of everything.

One has to be a “jack of all trades” to be a farmer, he remarked.

Taylor said that when the coronavirus came last March, there was uncertainty about how it would affect markets and disrupt prices. They had some distribution problems with fertilizer, but fortunately, not with seeds, he said.

“We kind of had to work through a strange period there in March, April and May. Of course, that’s our busiest time of the planting season. But we had to work around that and do things a little differently, especially with our suppliers,” he said. “Our biggest concern was nobody knew how long this was going to last.”

“Fortunately, things kind of got going back in the right direction for us, but the panic kind of threw everybody. But we all worked through it, and we’re still going,” he said.

One thing that changed for the better as a result of the pandemic was that there was a surge in demand for home-grown beef, he said. He now sells some beef on the farm. One of the problems, though, is that there aren’t enough slaughterhouses in the state.

“The slaughterhouse I deal with now, they’re two years out” on processing cattle, he said.

Taylor’s children may be able to carry on the family tradition because the family already has always had land, but for those without acres of good soil, the costs of land, equipment and production are usually cost-prohibitive.

The housing market in the rural western Clark County that is good for real estate agents and builders is bad for farmers because it drives property prices so high that it’s hard to buy a farm except to develop it.

“Everybody wants to live in the country,” he said.

Still, Taylor is hopeful about the future of farming, in part because of rapid improvements in technology that make it possible to produce a higher yield on fewer acres.

“I think we’re going in the right direction,” he said.

Graham, 60, a former county judge-executive and state representative is an executive with Farm Bureau but still runs about 100 cows, produces hay and leases some 200 acres of ground to friends for growing grain at Goff’s Corner near Pilot View.

These days his son, Drew III, does a lot of the farming, he said, but he still enjoys working on the farm.

“He’s feeding cattle and rolling hay and doing all those things where I can’t be there anymore,” he said.

Graham said “the most relaxing time I can have is when I can get out on the farm and do things a lot of other people might consider work.”

Like Taylor, he said, Graham said he was “bred” to be a farmer. His father was a farmer and his grandfather before him, and now his son is carrying it forward.

“You’ll see a lot of kids who leave the farm, but they’ll come back eventually, come back to that particular neighborhood,” he said.

His three daughters’ paths have been influenced by their rural background. One is a faculty member at the University of Kentucky College of Agriculture, and she and a sister who’s married to a farm kid from Henry County, both have degrees in agricultural and biosystems engineering. Another is a marketing manager in Nashville.

His wife, Laura Graham, runs a clothing store in Winchester that specializes in work apparel for farmers, blue collar workers and sportsmen.

Graham said the #StillFarming campaign is “a way for farmers to tell their stories, especially amid this COVID-19 pandemic.”

“You think about the coronavirus not affecting farmers because they’re out on the farm, but they’re the same people who are coaching Little League teams or are members of Kiwanis or the Rotary Club or are church elders and those kinds of things,” he said. “They’re very community oriented.

The role of  Kentucky Farm Bureau Federation and its national counterpart is to represent the interests of farmers, farm families and farming communities, he said. KFB is more than an insurance company, it is also an important lobbying and advocacy group.

Kentucky has more than 76,000 farms, most of them small, family farms, and 51 percent of the state’s land is farmland. Kentuckians are producing everything from poultry and soybeans to beef cattle and corn, and race horses are a big factor.

Farming is essential and always has been, and people sometimes forget that, Graham said.

#StillFarming is a way of reminding them.