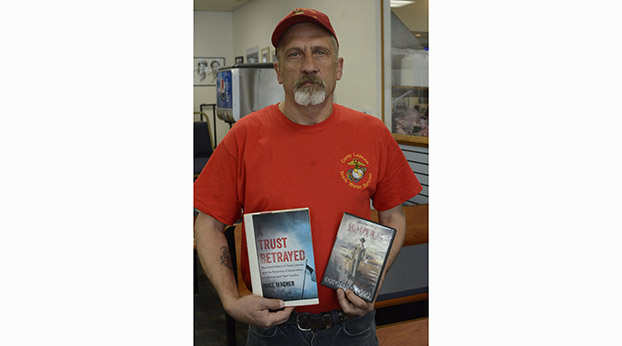 Semper fidelis is the U.S. Marine Corps’ motto, which, translated from Latin, means “always faithful.” It refers to the loyalty Marines have for one another and their country.

Former Marine Brian Amburgey of Winchester hasn’t forgotten that commitment. Thirty-five years after his service ended, he is still serving, standing alongside other veterans who were exposed to toxic water at Camp Lejeune, North Carolina, for decades and fighting for a medical registry to help them get the health care and compensation he believes he and they deserve.

Amburgey and his wife, April, are leading a petition effort to establish the registry and force the Department of Veterans Affairs and other federal agencies to study the health effects of chemicals that contaminated the water supply at the USMC base for decades, going back to the 1950s or earlier.

“It was an honor to be in the service of the Marine Corps, to defend this country. We put our lives on the line for everybody. Now it’s time for them to treat us with the respect that we gave this country,” Amburgey said.

They have invited members of Congress or staff, state and local officials and the public to an event Wednesday at 1 p.m. at the Elks Lodge at 225 Shoppers Drive in Winchester, where they will show an hour-long 2011 documentary about the water issue, “Semper Fi: Always Faithful.” Afterward, Jerry Ensminger, who lost his 9-year-old daughter to leukemia, Mike Partain, a male breast cancer survivor, and Dan Bailey, who has a brain tumor, will talk and take questions for the audience. All three Marines believe those illnesses were caused by contamination at Camp Lejeune.

Dr. Ray Dorsey, an expert on Parkinson’s disease, has also been invited to attend and speak.

An local Girl Scouts troop, a Veterans of Foreign Wars post and other groups will participate.

They will also present and discuss the petition and invite people to sign it, either on paper or at www.change.org, where they can find Medical Registry Camp Lejeune.

Winchester Mayor Ed Burtner, a former Marine who served at Camp Lejeune, is among the local Marines expected to attend, Amburgey said.

There are believed to be close to 1 million Marines who were affected by the water at Camp Lejeune, including others from Clark County, such as Alan Bradford, whom Amburgey met during the recent flood relief effort at the Red River in Clark County, and Winchester Mayor Ed Burtner.

In 2012, Congress passed and President Barack Obama signed into law the Honoring America’s Veterans and Caring for Camp Lejeune Families Act, which identifies 15 illnesses related to the contamination and makes the victims eligible for health care benefits through the VA. But Amburgey says the fact that there isn’t a registry like the one for victims of Agent Orange in Vietnam hinders the process. He said the denial rate for Camp Lejeune survivors’ claims is currently 96 percent.

“Our biggest thing right now is if we can get this health registry, it will benefit so many,” Amburgey said.

Though there is no registry, the VA does have a notification database with more than 250,000 registrants. Among them are 4,386 people from Kentucky.

The VA acknowledges the exposure occurred between 1953 and 1987, but Amburgey says it began before then and continues today.

Amburgey said he has health problems that he believes were caused by the water at Camp Lejeune when he trained there in 1984.

“I’ve got memory loss. I get tremors in my hands and arms … and legs,” he said. “A lot of us also, our teeth just break off.”

April said that during a meeting with officials from the Centers for Disease Control and Prevention in January 2020, veterans were told “It would take an act of Congress to get a health registry” for those who were at Camp Lejeune. After hearing that, she told her husband, “OK, let’s do it.” Get an act of Congress, that is. So she wrote the petition with the help of Brian, Bailey and his wife, Tina. She hopes to get 100,000 signatures, she said.

“We’ve been fighting ever since,” she said. “We’re not going to stop.”

Those who attend the meeting Wednesday are asked to wear masks and follow other COVID-19 guidelines.

Any veteran who wants more information may call Brian Amburgey at 859-771-7717 or email him at amburgeybrian93@gmail.com.