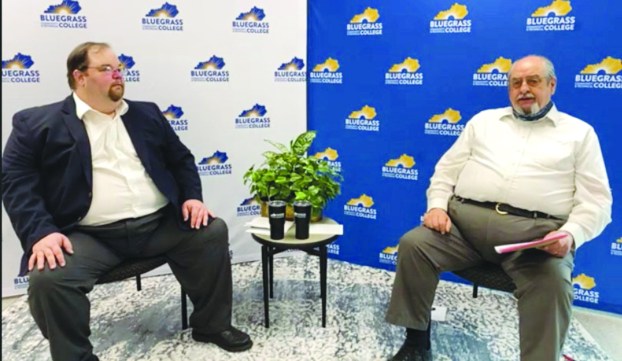 Winchester Mayor Ed Burtner looks into the camera as he talks about the state of the community during an online meeting last week while Clark County Judge-Executive Chris Pace, left, listens and waits his turn to speak. (Screenshot)

Winchester and Clark County have faced hard challenges in the past year, but the future looks brighter, Mayor Ed Burtner and County Judge-Executive Chris Pace assured more than 50 participants in an hour-long virtual meeting last Thursday.

The State of the Community address to the Commerce Advocacy Team was rolled into one of the “wrap-around services” Zoom meetings that began almost exactly a year ago to bring emergency services, health agencies, schools, and other institutions together each week to work together on dealing with the COVID-19 crisis.

Burtner began by commending the community, and particularly the Clark County Health Department, for the response to the viral pandemic.

“The numbers are coming down, the community has responded, the schools are back in session,” and testing and vaccinations are becoming more widely available, the mayor said.

“This has been a very trying time. We have fought COVID, then the ice storm, which was a horrible event … and that was followed by flooding,” Burtner said.

And national crises, such as the Christmas Day bombing of an AT&T transmission center in Nashville that took out 911 services in this part of Kentucky were also a factor, he said.

“We have to be ever vigilant” and be prepared for whatever crises occur, he said.

Although the coronavirus crippled the economy, there are signs it is coming back, both leaders said.

‘There is a recovery underway. It is happening faster in Clark County,” Pace said.

“More importantly,” Pace said, “we stand united as a community, and we continue to move forward, no matter what challenges are put in front of us.”

Burtner noted that “during the worst of last year,” unemployment was in the 14-15 percent range, but now it’s back down to about 5 percent.

“Our economy is rebounding,” he said. “It’s coming back quickly, and strong.”

Burtner said Winchester Municipal Utilities had for months been able to avoid cutting off customers who couldn’t pay their bills because of job losses or other financial difficulties, and the city had benefited from CARES Act funding and a Department of Housing and Urban Development grant to help residents with utility relief.

He also mentioned the city providing checks to small businesses to help with COVID relief.

Burtner said the city government has been careful in controlling expenditures during the downturn.

So has the county, Pace said, and last year it implemented “the largest single tax cut in over two decades.”

“Taxes have been cut, and we still have more money in reserve than ever before,” he said.

Instead of raising taxes, he said, the county has gone after other funding, including state and federal grants, and has been able to provide more funding for firefighting and law enforcement, tackle stormwater issues and repair roads.

Even though they have taken a conservative approach to taxing and spending, the men said, their governments are working on several big projects.

Burtner said the city’s first priority for transportation projects remains the $4.95 million extension of 7th Street to Maple Street and Veterans Memorial Parkway near Interstate 64, which will reduce truck traffic in a residential part of town. The city has come up with $300,000 of the cost.

Prompted by a question from state Sen. Ralph Alvarado, R-Winchester, about estimated $30 million project to complete Winchester’s bypass, Pace said it would be hard for the state to allocate that amount of money in the near future, but the project has received half a million dollars for an environmental impact study, and once that study is done, the county and state can go after a federal BUILD grant.

“We’re going to keep knocking until we get that grant,” he said.

Another priority for Pace is getting funding for a widening of U.S. 60 between Winchester and Lexington.

“We see a bright future for the expansion of U.S. 60 and commonsense growth along with it,” he said.

The judge-executive said the county is also working on a project to bring rural broadband to Clark County.

“I will see to it that we have over 2,000 new homes with service over the next six years,” he said.

As examples of progress, the mayor mentioned WMU’s new 9 million-gallon-per-day water treatment plant, two wastewater treatment plants, on Van Meter and Boonesboro roads, efforts to comply with a 20-year-old consent decree order from the Environmental Protection Agency, and the Kentucky River Authority’s project to rebuild Lock and Dam No. 10, which is nearing completion.

In the past year, Burtner said, the city has rebuilt 3,000 square feet of sidewalk in the downtown area and focused on making the high side of Main Street more handicapped-accessible.

The mayor mentioned the Farmers Market’s return in May and a project to provide a covered pavilion for the market. He mentioned that Abettor Brewing would be moving to a new location near the market and that Mountain Comprehensive Care would be taking over the old IGA grocery building across the street.

He mentioned that Main Street Winchester met Tuesday to discuss filling its executive director position, and he looked forward to the return of downtown events that were canceled last year because of the pandemic.

He also commended the community for supporting “the rebirth of local radio” in Winchester, referencing Tim Smith and WWKY and WKYN-FM.

One of the initiatives Burtner said he would like to see come to fruition this year is a park to honor military veterans.

Burtner also complimented the wrap-around Zoom meetings initiative, calling it “an amazing process from the very beginning, having a communication venue where people can talk, compare notes, see what needs to be done, and address and tackle challenges.”