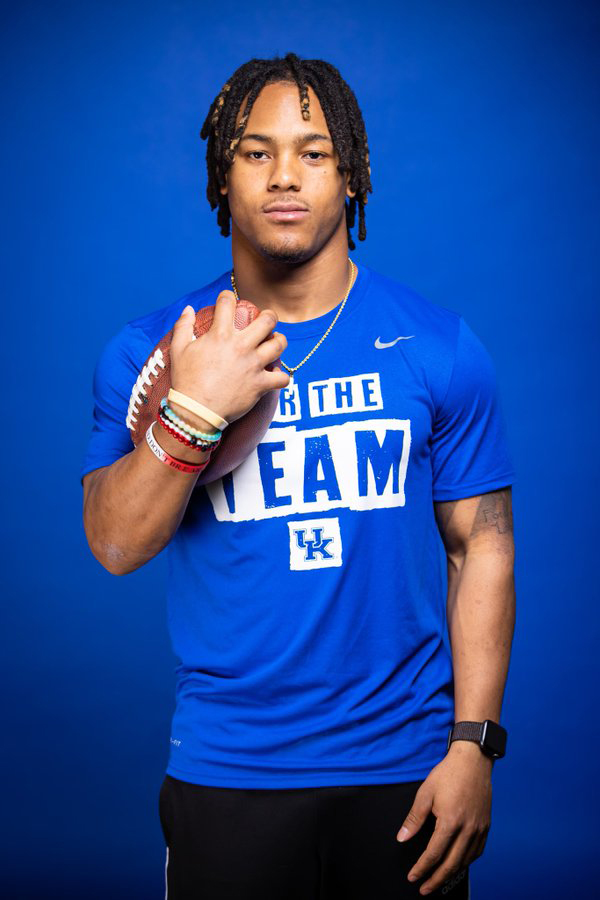 Kentucky told Wan’Dale Robinson exactly what he wanted and needed to hear.

“They told me that they needed just a little spark on offense. Obviously, the run game was there. They just need some guys to have explosive plays, stretch the field and open up the box a little bit so that we’re more balanced on offense,” said Robinson.

He’s always been a spark. During his prep career at Western Hills he amassed 8,582 yards and 118 touchdowns. His 781 career points rank second all-time in Kentucky high school football history. He swept the state’s major individual awards his senior season and committed to UK before flipping and signing with Nebraska.

Robinson had a productive two years with the Cornhuskers as a receiver/running back.  He had 1,029 all-purpose yards as a true freshman,  the third-highest total ever by a Husker true freshman and was a second-team freshman All-American in 2019. As a sophomore in 2020, he had 51 catches for 461 yards in eight games and ran for 240 yards.

He decided to leave Nebraska because of his mother’s health and had numerous options. Kentucky adding offensive coordinator Liam Coen and his pro-style scheme helped close the deal with Robinson and UK.

“Seeing the things I could do to hopefully get to the next level, and then actually getting to talk with him (Coen) during the recruiting process, to sit down with him and watch a little film of the things I can do, that’s what really sold me,” Robinson said.

Coen says getting Robinson was “huge” for Kentucky.

“He’s a guy you can get the ball to. I can design all the plays in the world to get people open and that’s my job but there are also times as a play caller you just call a quick throw and catch and the kid takes it 50 yards. That’s not great coaching but great players,” Coen said.

“He’s that type of player. He is a dynamic playmaker. We are lucky to have him. He absolutely works his tail off. He’s a total film junkie and the kind of kid you want to be around.”

In eight games last year, Robinson had seven catches for 20 or more years. Josh Ali led UK in 2020 with five receptions of 20 or more yards in 11 games.

“He is a dynamic playmaker. With this new offense we are going to showcase not just him but a lot of guys. But he’s going to be really good in this offense,” Marrow said. “Nothing against the Big Ten, but this is a grown man’s league (in the SEC). There’s a lot of man coverage in the SEC because you have those big monsters on the line getting after the quarterback. I think he is really going to benefit playing in this league with all the  man coverage.”

Freshman quarterback Kiaya Sheron of Somerset never got to see Robinson play in high school but he did play 7-on-7 against him.

“Just watching him was fun,” Sheron said. “He’s explosive and can make plays all over the field.”

“I watched Wandale when I was younger and watched his progress. It’s really kind of weird to play with Wan’Dale. He’s one of those guys you heard a lot about.”

Robinson became a household name in Kentucky by the time his playing career ended in 2018. Not only were his numbers ridiculous offensively, but he was a solid tackler on defense and a dynamic kick returner.

He thought there would be “chatter” about him coming back to UK but also wondered if some fans might still be bitter that he decommitted from the Cats.

“I knew there would be a lot of chatter with how everything went on and how I decided to leave (Kentucky for Nebraska),” Robinson said. “I am excited to be here. I do not pay too much attention (to the chatter) but it is kind of hard to get away from it.”

Robinson is confident he can succeed in the Southeastern Conference and help UK’s offense that has been run dominant the last three seasons.

“It’s just match-ups. The passing game goes through that slot guy. That’s really what I want to do, be an efficient route runner and catch a lot of balls to move the chains,” Robinson said.