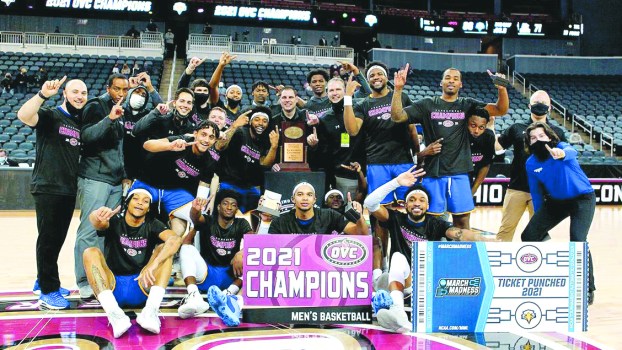 John Calipari couldn’t hide his pride about having two of his former staff members getting Morehead State into the NCAA Tournament for the first time in 10 years.

Morehead coach Preston Spradlin was on the UK staff from 2009-2014 and Morehead assistant coach Dominic Lombardi was assistant video coordinator at Kentucky for two seasons at the same time Spradlin was at Kentucky. Spradlin’s duties at UK as a graduate assistant and then assistant director of operations included film breakdown, scouting, working with NBA personnel and conducting camps both on and off campus.

“Really bright basketball guy. Really a level-headed. As a matter-of-fact, if I remember right, I put him in practices because he could still play,” Calipari said about Spradlin. “I mean, he was a really good shooter.”

Calipari said Spradlin told him Lombardi had done “unbelievable work” and had been an “absolute giant” for the Eagles, who won 19 of 20 games to get into the NCAA Tournament.

“That’s what he’s about. I mean, pushing the guys around him, not worrying about himself. And I told him, he said, ‘My team was tough, Coach. They were tough.’ So, when you look at it you know, and I know that’s how you win,” Calipari said.

Calipari said a lot of high major teams were not going to want to play Morehead, the best defensive team in the Ohio Valley Conference.

“I’m happy that those guys have done what they’ve done and they’re in the NCAA Tournament and they won their league. It’s just been good,” Calipari said.

BY LARRY VAUGHT Vaught’s Views If you are an optimistic University of Kentucky basketball fan you have to hope that... read more