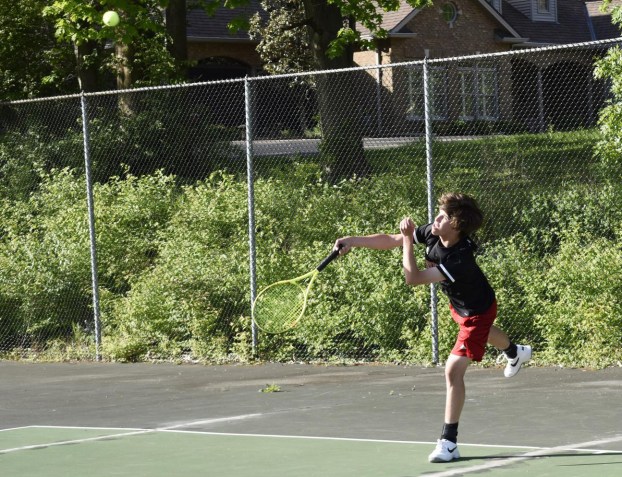 Junior Tennyson Prater is one of the top returnees. - Smoke Signals file photo

A new era for Cardinal tennis

Like all the other spring sports in the state of Kentucky last year, tennis was unable to have a season due to Covid-19.

But, in a new year like 2021, GRC’s tennis program is molding a new era right before our eyes.

With six beautiful new courts and one eager new coach, Seth Heinss, GRC tennis looks to have a promising future.

“Growing up in Corbin Kentucky, my high school tennis team became a sort of family to me,” says coach Heinss. “We had an atmosphere that nurtured the love of the game. When I and several others joined the team in middle school we looked to the upperclassmen for leadership and guidance. As I grew up and got older I put the same effort into investing in the younger players, just as the upperclassmen invested in me. Through that system my hometown has built a 20 year region winning streak that is still alive to this day. That is what I want to build here at GRC, I want my players to invest in each other and the younger players and just expand the love for the game.”

The GRC tennis program has the accommodations now to build a legacy like no other. GRC has never owned a tennis court, let alone six. The courts bring excitement for the young players and the community.

“The tennis center is amazing,” says Heinss. “I can only imagine how beneficial our new courts will be in fostering an interest in tennis within the younger generation in the community. Having a beautiful place to practice and host events, summer clinics, and tournaments really makes me believe there are some strong teams in GRC’s future.”

The teams are both fairly young, but show prominent players who could run deep into the regional tournament this year.

On the boys side there is Tennyson Prater and Holden Bishop, who hold the only returning experience in regional play. They have both worked extremely hard this offseason and have the potential to do some great things this season, according to coach Heinss.

“I’m excited to see younger players step up on this boys team and show me what they can do,” says Heinss. “Spots are open and for the taking; it’s just a matter of who wants them.”

On the girls side there are several returning players with region experience. Some include Ella Martin, Lakyn Grifith, Kamryn Richardson, and Shelby Meade.

Coach Heinss said along with those four, Aniston Culton, Sydney Ely, and Barbara Sheehan show promising talent for the Lady Cards this season.

“Both the girls and the boys have a tough schedule this season,” says Heinss. “But playing good teams will only make us better and show what we need to work on as the season goes on.”

The Cardinals start off their season with a tough road match Tuesday, March 16, against a Henry Clay team who most likely will have state-seeded players.

“Playing a great team like Henry Clay should help me gauge where we are,” says Heinss. “I want my players to use this opportunity to show me what they’ve got.”

The Cardinals’ first-ever tennis match at GRC is scheduled for Thursday, March 18, at 5:30 p.m. against Bourbon County, so come out and support a new era of GRC tennis.

BY LARRY VAUGHT Vaught’s Views He barely played after the first two games of the season when he had 13... read more