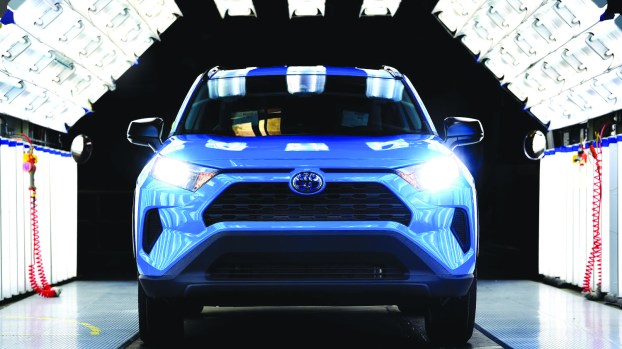 This RAV 4 Hybrid was the 13 millionth vehicle produced at the plant in Georgetown. TMMK Georgetown, Kentucky. - Photo by Joseph Rey Au

A special RAV4 Hybrid that rolled off the line at Toyota’s largest plant worldwide in Georgetown, Ky., marked the 13th millionth vehicle assembled at Toyota Motor Manufacturing Kentucky, or TMMK, since production started in 1988.

“On one hand, it’s hard to believe we have produced 13 million vehicles,” said Susan Elkington, TMMK president. “However, when you consider the dedication and skill of our Kentucky team, it isn’t so hard to imagine. It’s incredible to think about our customers, their families and all the places they’ve gone in our 13 million vehicles. Looking forward, we are excited about the future of mobility and being able to take more people, more places.”

TMMK, best known for producing the Camry and Avalon, began production of the RAV4 Hybrid in January 2020 as the result of investments by Toyota, totaling over $1.5 billion since 2017.  This was part of a larger commitment by the company to invest over $13 billion in its North American manufacturing operations from 2017 to 2021. That goal was reached a year early while creating over 6,500 jobs.

The 1,300-acre Georgetown campus, Toyota’s first plant in North America, represents an $8 billion investment and employs over 10,000 Kentuckians.  It is also home to a powertrain facility on track to reach its own milestone this year, producing its 13 millionth engine.

“The engine is the heart of every vehicle and our powertrain team takes that responsibility very seriously,” said David Rosier, TMMK powertrain head. “We’re especially proud to be a part of Toyota’s commitment to alternative fueled vehicles and the future of mobility in North America.”

According to the company, Toyota has been the leading manufacturer of alternative powered vehicle sales in the United States for 21 consecutive years. By 2025, Toyota’s goal is to have 40% of new vehicle sales be electrified models, and by 2030 expects that to increase to nearly 70%. Globally, this commitment to alternative fueled vehicles has resulted in the avoidance of an estimated 139 million tons of greenhouse gas into the atmosphere.

Toyota Kentucky is recognizing the milestones with a $1.3 million commitment to furthering STEM education and workforce development programs across Kentucky. Funds will be utilized to engage diverse and under-resourced youth by exposing them to great manufacturing career opportunities. A few of the grant recipients include:

It was a year of milestones for the automaker. In February, the company celebrated its 30 millionth North American produced vehicle, a Toyota Sienna produced at its Princeton, Ind., plant. Later this year, Toyota Kentucky will celebrate its 35th anniversary and the production of its 10 millionth Camry.

Gov. Andy Beshear announced on Tuesday that a new variant of COVID-19 has appeared at a nursing home in eastern... read more