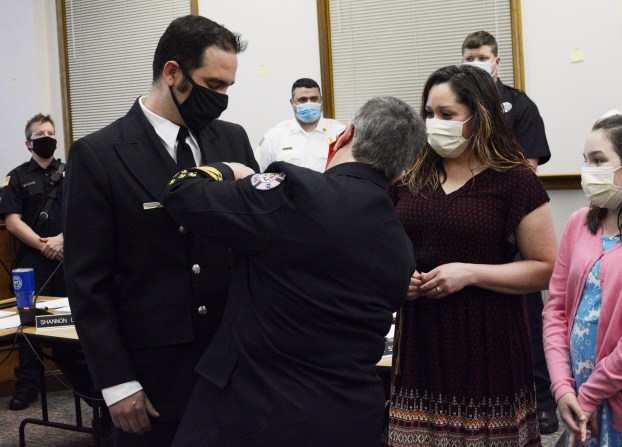 The Winchester Board of Commission gave the go-ahead last week to purchase a new canopy for the planned Farmers Market pavilion, though they haven’t yet approved the bid.

Brian Ward of Palmer Engineering recommended going with Recreational Concepts’ proposal of $211,782.50, which was the second lowest of the four bids received for the 24 by 272-foot canopy to create a covered pavilion for the market on Depot Street.

Reasons given for the choice were that the company “performed the most up-front design reducing potential issues,” had the fastest delivery time (12 weeks) and were the manufacturers the structure for the Mt. Sterling Farmers Market.

Commissioner Ramsey Flynn asked if the project includes doing anything with the old silo left standing after the Sphar Seeds building was demolished.

Ward said the design is mostly complete, and construction should take about three months.

The Farmers Market is planning to open on May 8, Fink said.

Also during the meeting, the commissioners decided to close Depot Street from 2 to 6 on May 15 for the Janet Gentry Car Show instead of 1-5 because last year it was a problem for Farmers Market vendors who were moving out as the car show was moving in.

They also approved a street closing for the Arts on Main event Oct. 2 from 7 a.m. to 4 p.m.

• An order was approved for funding from the Downtown Development Investment Fund for revitalizion of upper-story residential property at 53-55 S. Main St. Wayne and Karen Combs purchased and began renovating the property six years ago, but the project was sidelined by medical issues, and they couldn’t afford to complete the work. They are converting the space into apartments. The estimated cost is $60,000.

• The mayor and commissioners presented service awards to Bobby Wolfe and Robert Pritchett for feeding first responders and others at Bargains on Broadway during the winter storms in February.

• Sgt. Monty Corbett of the Winchester Police Department gave a presentation on homelessness and the rights of the homeless.

• An order authorized the installation of a streetlight at Breeze Hill Drive.

• The job description of the Main Street Winchester director was amended.

• An order was approved rescinding an order employing Howard Hamilton as a patient transfer specialist and paramedic.

• The resignation of Asha Borman as a firefighter III/EMT was accepted.

By Sen. Ralph Alvarado I am welcoming some return to a normal schedule as the 30-day session of the Kentucky... read more