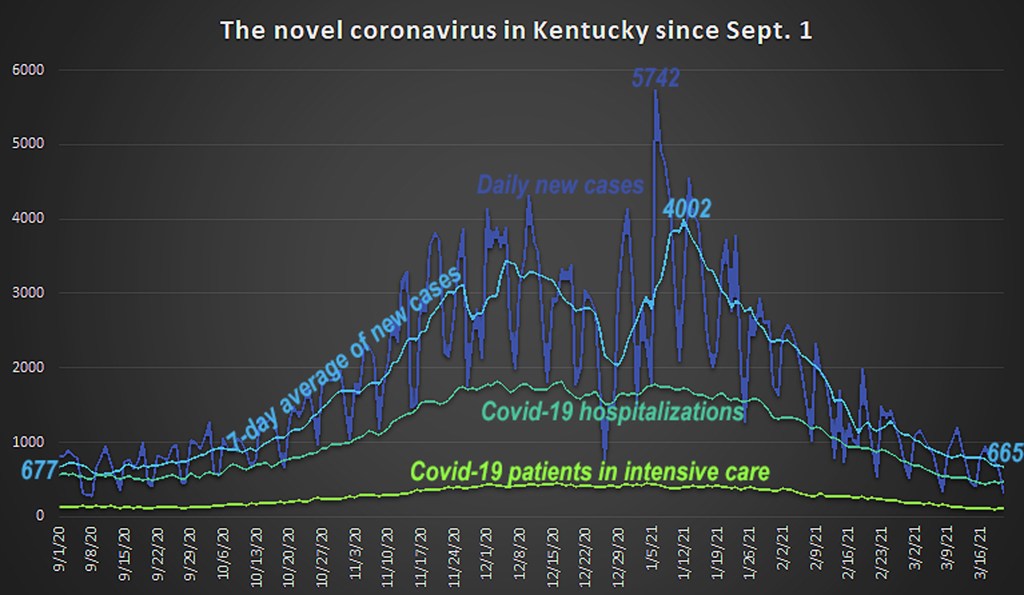 The course of the Covid-19 pandemic in Kentucky crossed another threshold Sunday: In the last seven days, fewer than 3 percent of residents tested for the novel coronavirus got a positive result. That continued a general decline for the last month and a half that has brought the positive-test rate to levels not seen since June, the first full month that testing was widely available.

The state reported 316 new cases of the virus, the fewest on any Sunday since Sept. 6. That brought the seven-day rolling average of new cases to 665, virtually the same as it was Sept. 1.

The only sign of increased concern was that Covid-19 patients in intensive care were more likely than ever to be on ventilators.

Kentucky hospitals reported 463 Covid-19 patients, six more than Saturday, with an unchanged number of 111 in intensive-care units. But the number of those on ventilators rose by six, to 71, meaning that 64% of ICU Covid-19 patients were mechanically ventilated, the highest share since Kentucky Health News began tracking it in late October.

Kentucky’s rate of new cases over the last seven days ranked 22nd in the nation, according to The New York Times. The state’s new-case numbers have declined more slowly in the last 10 days than they did the previous 20, but numbers in other states have gone up, improving Kentucky’s national ranking.

The state added 16 more fatalities to its list of Covid-19 deaths, plus two that it said were found by the ongoing audit of death certificates. Not counting those two, the state has added an average of 23.9 deaths per day to the list over the last two weeks. The daily average for the past month is 25.2.

As usual on a weekend, the state did not issue an itemized list of deaths by county, age, sex and date.