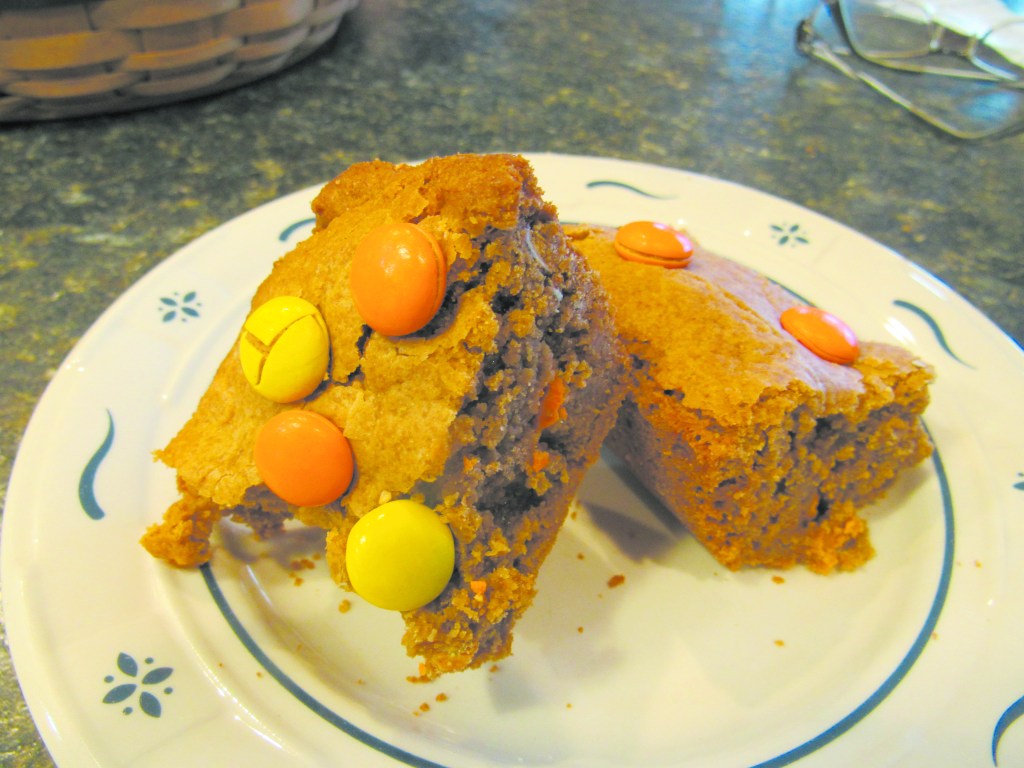 In a saucepan over medium heat, melt the butter and brown sugar, stirring until smooth.  Remove from heat, and stir in the peanut butter.  Set mixture aside to cool.

In a large bowl, whisk together flour, baking powder, baking soda, and salt.

Add eggs, one at a time, to the peanut butter mixture, mixing well after each egg.  Stir in pure vanilla extract.  Add this mixture to the prepared dry ingredients, and stir until batter is smooth.  Fold in 1/2 cup of Reese’s Pieces, leaving 1/4 cup to sprinkle on top.

Bake for 25-30 minutes or until top is golden brown and edges are lightly browned.  Allow 20 minutes to cool and cut into squares.  Cover and store leftover blondies at room temperature or in the refrigerator for up to 1 week.

Freezing Instructions:  Blondies freeze well up to 3 months.  Thaw overnight in the refrigerator then bring to room temperature before serving.

I’m still looking for ways to use up some of the four large jars of peanut butter that are in my pantry. During an internet search with “recipes using peanut butter” as the question, I printed out this recipe for Reese’s Pieces Peanut Butter Blondies from sallysbakingaddiction.com. Reese’s Pieces is one of my favorite candies, since the little round pieces don’t have chocolate in them.  I know, you are probably like most people and can’t believe I don’t like chocolate; but I don’t.

We were in the mood for meat and potatoes so Brad volunteered to cooked a roast, carrots, and potatoes for our evening meal. I made vegetable soup out of what was left over for the following night’s supper. Since I made a giant pot of soup, we invited friends of ours over to enjoy it with us. When they said yes, I got busy making the blondies.

I put the butter and dark brown sugar into a saucepan and let the mixture melt, stirring occasionally. The sugar didn’t completely melt, but I was afraid it would burn so once it was pretty smooth, but grainy I removed it from the stove, added the peanut butter and set the pan aside to cool.

In a large bowl I combined the dry ingredients. I checked on the butter mixture and hoped it was cool enough and then cracked an egg into the pan, stirring quickly. I think the mixture was probably still too hot because the egg looked like it was trying to cook so I started stirring even faster and didn’t stop until the egg appeared to be combined, then I added the second egg and stirred fast again. Next, I poured in the vanilla and gave the batter a quick stir before dumping in the dry ingredients. The batter was very thick and I had a hard time thoroughly mixing in the Reese’s Pieces. My arm definitely got a workout. The batter was so stiff it would not pour into the prepared pan. I had to scoop the batter into the pan and then spread it with a spatula; then I sprinkled the remaining peanut butter pieces over the top.

The blondie mixture went into the preheated oven and I set the timer for 25 minutes. When the timer sounded, I removed the pan from the oven and let the blondies cool for 20 minutes. I sliced the warm blondies into squares and left them in the pan to completely cool.

That evening after our friends Teri and Michael arrived and we ate soup, I asked if anyone wanted dessert. They’d brought some cookies and cupcakes for us to enjoy but we all opted for a Reese’s Pieces Peanut Butter Blondie.

After Teri scooped one of the blondies on her plate she asked if we could heat it up and add a scoop of ice cream. I thought that was a great idea.  While she heated her blondie in the microwave, I got the vanilla ice cream out of the freezer.  Michael and I followed her lead and heated our blondies too; Brad ate his at room temperature.

The heated blondies were so yummy, we all loved them and Teri’s idea was spot on.  Brad said the one he ate was really good too.  Brad and Teri thought the blondies tasted like they had chocolate in them.  After eating my one blondie heated up with a little scoop of ice cream, I tried a sliver of another one not heated up and agreed with Brad that it was delicious.

After eating mine though I do believe I cooked them a little too long and next time I’ll check them after 20 minutes.  That way they’ll be a little on the gooey side.

There was no way I wanted these dessert bars around our house so I sent a few homes with Teri and Michael, along with some soup for their enjoyment the next day (or two).

Now you know Brad isn’t a sweet eater, but this recipe is definitely the exception for him. He’s a dark chocolate lover and usually only a push over for sweet treats that include chocolate. But I’ll have to tell you, he ate more of these blondies than I did.  He commented more than once, that I should not make these again unless we were going to share them with other people.

Almost every time I ate one I heated it up, they were so good and I agree with Brad that I don’t need to make them very often.  There is one note, these blondies were good for a couple of days after I baked them, but by the third day they were getting a little dry.  I don’t agree with the recipe that they would be good for a week.

I definitely Nailed this recipe and I’ll mark it as a favorite.