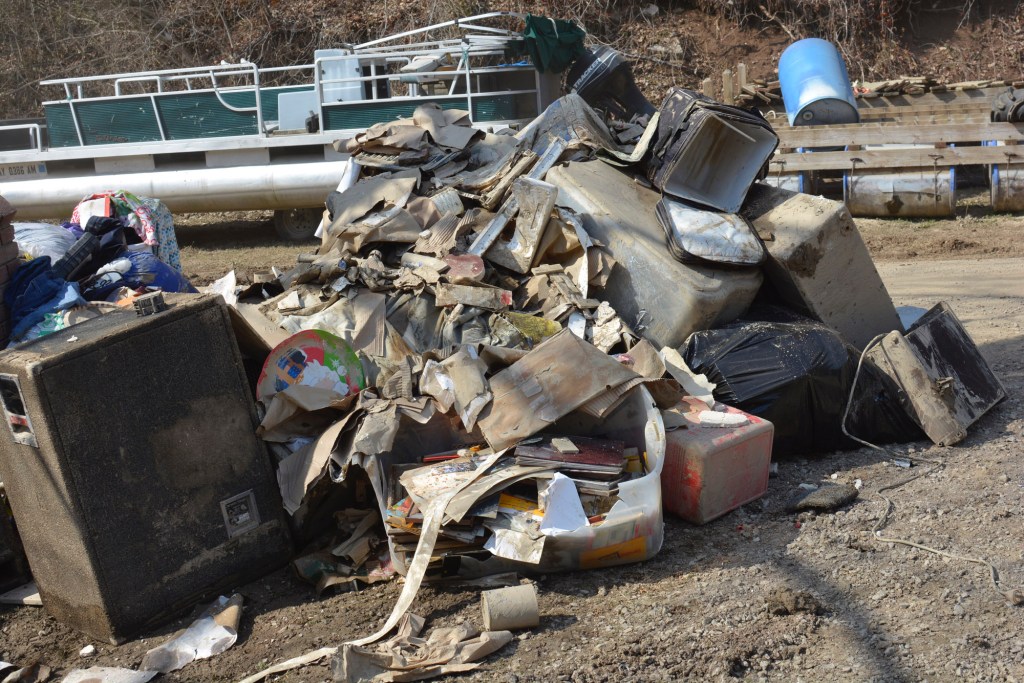 Residents of Amster Grove dragged muddied and ruined personal belongings out to the road when they were cleaning up after the flooding in early March. The county;s soild waste program had to pay for several dumpsters and dump trucks to dispose of the rubbish. The county has applied for a grant of $25,000 to reimburse it for the cost of the cleanup. (Photo by Randy Patrick)

The Clark County Fiscal Court will apply for a $25,000 flood cleanup grant.

Magistrate Daniel Konstantopoulas proposed the grant application at the court’s meeting last Thursday, and the other members agreed.

County Solid Waste Coordinator Allan Curtis would apply for the grant from the Kentucky Pride Fund, which gets its revenue from a $1.75 per ton environmental remediation fee for garbage disposed of at any Kentucky municipal solid waste disposal facility. The Kentucky Division of Waste Management administers the fund.

The money would help pay for disposal of discarded items in places in Clark County that were affected by the flooding, such as along the Kentucky River at Athens-Boonesboro and Amster Grove Roads and along the Red River at Trapp.

County Judge-Executive Chris Pace commended Konstantopoulas for his attention to his constituents along the Kentucky River at Boonesboro, where the worst of the flooding was.

“I know it’s been a trying time, and you’ve been down there plenty, and I appreciate the work,” Pace said.

Earlier that day, state officials had said that qualifying counties could receive up to $25,000 from the fund after the record floods at the end of February and first of March.

Gov. Andy Beshear declared a state of emergency Feb. 28 for 48 counties, including Clark, and deployed state resources to help the affected areas. Among the counties adjoining Clark County that qualify are Powell, Montgomery, Estill, Madison, Jessamine and Fayette.

Eastern Kentucky counties were especially devastated by the flooding, which followed closely on the heels of an ice storm and heavy snowfall.

A Kentucky Floods Cleanup Hotline has been set up at (800) 451-1954 for services including clearing trees, removal of drywall, flooring and appliances, tarping of roofs and mold mitigation. Services are available through March 26 as resources allow.