A fresh season opens up for GRC softball 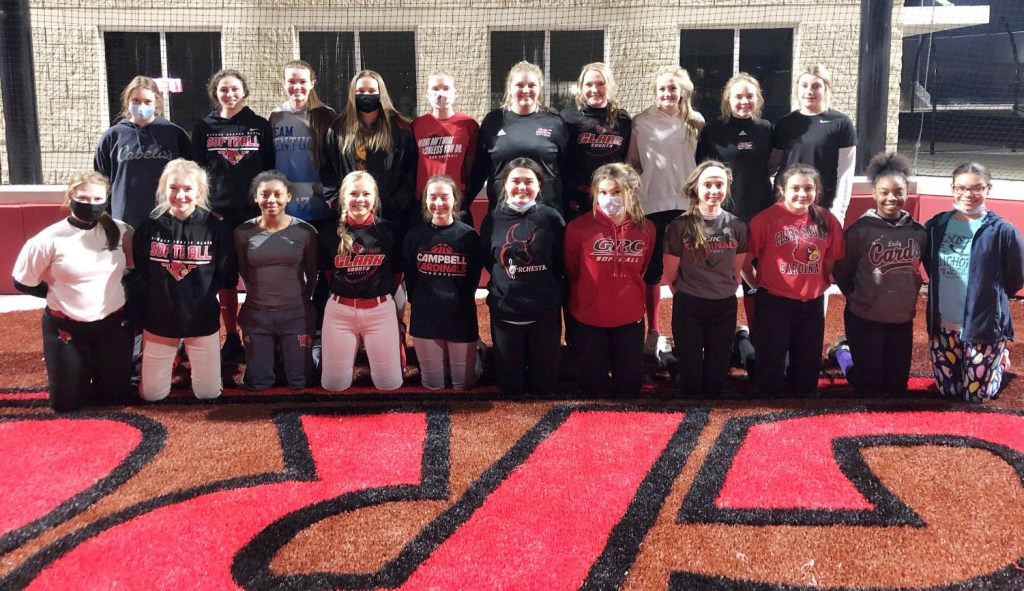 GRC softball is ready for a fresh start and a new season.

As a fresh season opens up for the GRC softball team, Coach Gary Preece is prepared for his first official season as the softball head coach.

Due to the unfortunate events of Covid-19, Coach Preece’s first season with the Cardinals was canceled before it even began, leaving himself and many players heartbroken.

“Excitement constantly runs through my mind when thinking about the season,” says Preece. “With 2020 being such a tough year, we feel very blessed to even be able to play this season. We’re excited to open up a new chapter for GRC softball with all our new facilities, you can just feel the excitement from my girls every practice.”

The facilities have been long anticipated, but couldn’t come at a better time.

The all-turf field will allow the Lady Cards to play more games without weather-related cancelations, not to mention allows for more practice time due to less preparation and cleanup.

“It’s been awesome having the new field,” says senior shortstop Kendall Harrison. “It has definitely been a learning experience dealing with the turf, but it’s worth it. Field prep is very short and allows us to focus more on practices and for future games. I think I can safely speak for the whole team when I say playing our first game on our new field will be something we will always remember.”

Harrison, the Lady Cards’ lone senior, is a very talented player with a good bat and a lot of experience playing multiple positions.

“What a great player to have as your leader out of the field,” says Preece. “Kendall leads by example. She always puts the team first and that is a quality I strive for my leaders to have.”

The strength of the team falls with their junior class, relying heavily on Emily Schooler and Ashley Martin to go to work on the mound and at the plate.

Marly Rogers, Paige Caudill, Simone Campbell, and Gracie Clements are among the other juniors who provide flexibility within the field and are dependable players to have at the plate.

According to Preece, many of his players played travel softball this summer and fall, which really helped their game improve and stay sharp for the upcoming high school season. Along with travel ball, players have been working out in the brand new field house since the beginning of January.

With the four drop-down batting cages and the indoor turf space, the girls have had a tremendous amount of reps that should give them an upper hand to teams this season who might not have had any offseason work.

“The new fieldhouse has been a blessing in so many ways,” says Preece. “With all of that extra space we have been able to work with individuals more one on one than we ever could have in our old facility.”

Starting the long-overdue season will give back a small piece of normality to these kids and everyone across the state of Kentucky. The abnormal season places every team in the state on an even playing field, because most teams have little to no varsity experience.

With Covid protocols and guidelines, nobody knows exactly what the season will look like, but with all the anticipation this season should pan out to be one of the most exciting years of softball yet.

“Words can’t describe how excited I am about the season,” says junior pitcher Emily Schooler. “The anticipation for the season opener just keeps getting bigger and bigger, we’re all just so ready to start playing games.”

GRC softball opens up their highly anticipated and long awaited season at their new field with two straight home games.

Their first game is against the Lady Colts from West Jessamine on March 29, followed by the Lady Jackets from Nicholas County on March 31.

“I’ve coached softball for several years now and I can already tell this group of young ladies are something special,” says Preece. “Give them some more time to grow together and I firmly believe good things are ahead. I can’t wait to start the season and I know everyone feels the same way. Roll Cards!”