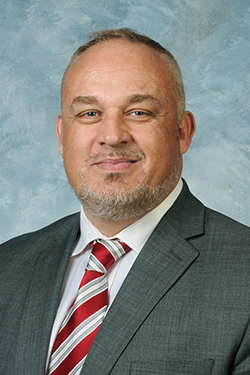 State Rep. Ryan Dotson, R-Winchester, was one of the few House members who did not vote for the final version of HB 563, which passed by only one vote and was vetoed by the governor.

A school choice bill that allows students to transfer from one public school district to another and creates state tax credits for private school tuition in counties with 90,000 or greater population, will become law with the support of both of Clark County’s state legislators.

Republican majorities in both the House and Senate voted Tuesday during a late night session to override 27 of Gov. Andy Beshear’s vetoes of bills, including his veto of House Bill 563, the school choice bill, “schools without borders,” as its sponsor, Rep. Chad McCoy, R-Bardstown, called it.

Among those who supported the bill were Sen. Ralph Alvarado, R-Winchester, an ardent supporter of school choice and private, Christian schools, and newly elected Rep. Ryan Dotson, R-Winchester, who changed his vote to back the bill.

When it was approved earlier in March in the House, it passed by only one vote, and Dotson abstained. On Tuesday, it passed by nine votes, with seven members not voting. In the Senate, the bill passed 23 to 14 with one senator not voting.

Dotson said Tuesday night that the bill he had originally voted out of the House included funding for all-day kindergarten, but when the Senate took that out of the bill, he couldn’t vote for it.

He said he had told Clark County Schools Superintendent Paul Christy and other constituents he would only support it if the kindergarten piece was included.

But $140 million in all-day kindergarten funding was included Tuesday as an amendment to another bill, HB 382, which allocates more than half a million dollars in federal coronavirus pandemic aid to cover state unemployment insurance benefits and $50 million to expand broadband.

“It just passed the Senate today,” Dotson said. “We’ll pass it on the floor of the House tonight. It’ll pass with flying colors.”

Currently, Kentucky only pays for half-day kindergarten. The funding under HB 382 will only be for 2022.

Last week, Dotson had been undecided about HB 563 because he said he supports both public education and school choice.

“I’m a product, and my children are products, of public education. I have no issues there. I just want to be able to support the people,” Dotson said regarding HB 563. “School choice already exists for those who have the money to do it. This helps those who are underprivileged or those who need tutoring, who need money for other things.”

He said a preference is shown for children at or below the federal poverty level in awarding the educational opportunity accounts.

Christy and other superintendents opposed the bill, saying it would take needed money away from public school districts.

Alvarado said it wouldn’t, because the funding is private, although donors get a tax credit.

There is no money coming out of the general fund for the program.

“I just think that privatizing education through tax credits isgoing to be detrimental to public education,” Christy said in an earlier interview.

As for students transferring from one district to another, the counties that receive the students will also receive the SEEK money from the state for those students.

“It’s a pilot program. We’re trying to see what works, and it gives us some understanding, you know to implement it, where we can go from here or whether it’s worth fooling with. So I think it’s worth that much,” Dotson said.

Storm sewer collapse to be costly