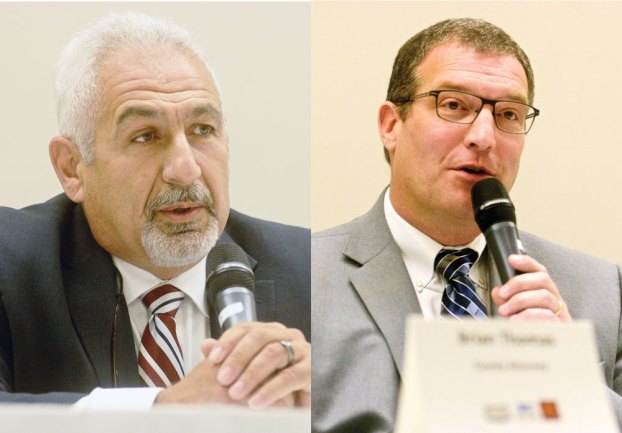 Defense counsel has not yet filed an answer to former County Attorney Jerry Madden’s wrongful termination and defamation lawsuit against county officials, but County Judge-Executive Chris Pace and County Attorney William Elkins, have commented on the complaint.

Madden was fired last spring based on allegations that he misled the Clark County Fiscal Court about the transfer of nearly $8,000, something Madden denies.

Madden has said he overlooked a purchase order for $7,996, which caused an account to be overdrawn, and he made a transfer to cover the amount, which he claims he was directed by Pace to do. The transfer was to have been accepted at the Feb. 27, 2020 Fiscal Court meeting, but the meeting was postponed until March 3, and according to Elkins, state law prohibits transfers from being made retroactively or without the magistrates’ approval.

In his lawsuit filed March 10 in Clark Circuit Court, Madden claims that he was wrongfully discharged and that his reputation was impugned by made-up allegations of misconduct, which “prevented him from obtaining employment.”

However, in an email to the Sun, Pace, who has not been named as a defendant, refuted the notion that any action or statement by county officials kept Madden from being hired by anyone else. Madden went to work across the hall from the County Judge-Executive’s Office almost immediately.

“I was confused by the lawsuit because Mr. Madden is not unemployed,” Pace said. “He has been working in a similar job in the County Clerk’s Office for almost an entire year.”

“Those claims are inaccurate and self-serving,” Pace said. “It is unfortunate we live in a society where plaintiffs are encouraged to bring lawsuits to try and get a settlement.”

Elkins said that a critical point to consider in the case is that at the Feb. 27 meeting, when the transfer should have been approved, Madden was asked by the Fiscal Court if the delay would cause a problem, and he said it wouldn’t. If he had said otherwise, the magistrates “could have fixed the impending accounting issue right then.”

Elkins said Madden then reached out to the Department of Local Government for a course of action and they advised him in an email on Feb. 28 to just close the month on a negative balance, have the Fiscal Court call a special meeting and get the county attorney’s approval.

“The budget officer’s directive was not followed, and an unauthorized finance entry was made onto the official accounting ledger of the Fiscal Court to obscure the negative balance when the accounting ledger, ‘the books,’ closed” on Feb. 29, Elkins said.

“Madden had the login credentials for such entries,” the county attorney noted.

At a special meeting on March 3, a “retroactive transfer” to authorize the “fixing of the books” was requested by Madden and denied,  Elkins said.

The computers were to be seized and examined, but “they were not turned over for at least two overnights where the condition of the data stored on the machine was changed during the delay and so the machines’ records were imaged and preserved, but not examined as they no longer existed in the condition they were in when the seizure was agreed upon,” Elkins said.

Elkins denied allegations of wrongful discharge and defamation, and he said he has video evidence that shows that in discussing the issue of criminal official misconduct, he “did not even come close to naming Jerry Madden or conclude that official misconduct had at that point occurred.”

Because the county attorney is himself a defendant, outside counsel will be retained to represent county officials in the case.

The lawsuit is against the Clark County Fiscal Court, Elkins, Magistrates Greg Elkins, Chris Davis, Daniel Konstantopolous and Joe Graham. All of the officials named are being sued individually as well as in their capacity as county officials.

The plaintiff’s attorney is former County Attorney Brian Thomas, who preceded Elkins in that position.