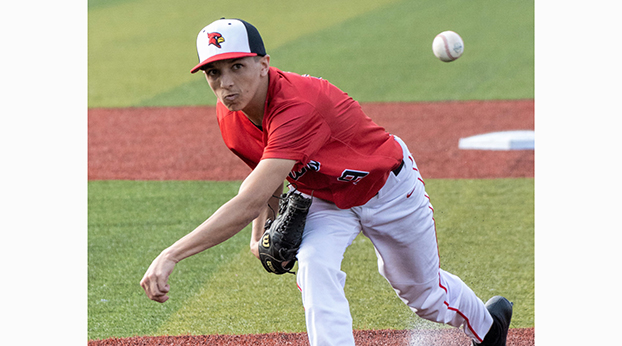 Keyonte Back tossed a no-hitter against Bourbon County as the Cards picked up their first win of the season Tuesday. - Photo by Jon Paul Martin

GRC junior Keyonte Back was solid on the mound Tuesday as he calmly threw a no-hitter against Bourbon County in the varsity contest. Bourbon scored first in the initial inning off a far-reaching fly. GRC answered the Bourbon run directly after. The game was tied going into the second inning, where GRC left Bourbon in the dust. GRC’s Ben Dawalt tripled on a 2-2 count, and Carter Maynard hit a single, each bringing in one run.
The Cards moved on to score five runs in the third inning with Brady Davis, Aaron Abner, and Ben Dawalt all advancing batters. The Cards were responsible for 15 hits in total, while Back held Bourbon hitless. GRC took the win at 12-2, which brings the Cards to 1-3 for the season.