Proposed abortion amendment signed, will be on Nov. 2022 ballot; Alvarado addresses importance of issue to voters 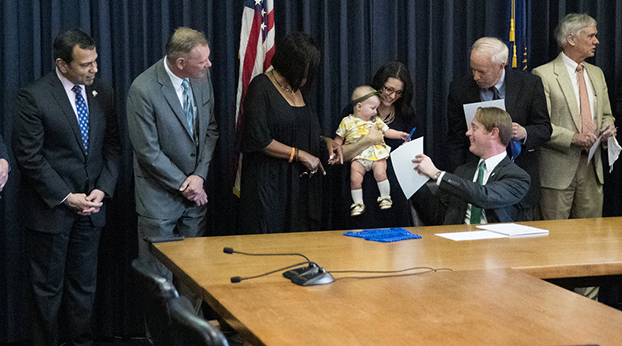 Secretary of State Michael Adams presents a signed copy of House Bill 91 to a group of pro-life advocates at a bill signing on Wednesday at the State Capitol. The measure places a constitutional amendment on the November 2022 ballot for Kentuckians to decide whether abortion is a constitutional right should Roe vs. Wade be overturned. (Kentucky Today/Brandon Porter)

FRANKFORT, Ky. (KT) – Secretary of State Michael Adams signed House Bill 91, a proposed Constitutional Amendment on abortion, during a ceremony attended by pro-life advocates at the State Capitol on Wednesday.

The language of the legislation is simple: “To protect human life, nothing in this Constitution shall be construed to secure or protect a right to abortion or require the funding of abortion.”

Rep. Joseph Fischer, R-Ft. Thomas, the sponsor of HB 91, called this an historic occasion. “We’ve worked on this bill for over a decade, actually, and we were finally able to get it through both houses and this time. We’ve passed a lot of great pro-life legislation over the past four years, but it’s meaningless unless we have people who will enforce it, and courts who will uphold these laws.”

He said that’s what the proposed Constitutional amendment is all about. “It will tell the Supreme Court that you have no business in the abortion issue. It’s going to be determined by the House of Representatives and the Senate. I am confident that in the future, the House and Senate will uphold the dignity of life from fertilization onward.”

Fischer says he is optimistic voters will approve the measure. “I am confident that the people of Kentucky are pro-life, and they will pass this just as Louisiana has recently, it’s on the ballot in Kansas, it’s passed in Tennessee as well. We’re all pro-life states here, and that’s what this bill will show the people of the United States.”

Sen. Ralph Alvarado, R-Winchester, noted, “Everybody talks about pressing our legislators on votes. This is an opportunity for the people of Kentucky to cast their vote on their issue, so it’s important for us to get the message out, let people know this is going to be on the ballot.”

He added, “This is probably going to be one of the most important votes the people in the state will vote on in their lifetime. If enough states do this, it’ll push the federal government really the Supreme Court to overturn the wrongful decision they made in 1972. This is our best chance to get this done.”

Prior to signing the bill, Adams said: “One of the perks of my jobs as Secretary of State under the Constitution, is I get the Constitutional amendments. They don’t go to the Governor, they come to me. I get to sign them. I’ve already signed a couple, but I take no more pleasure than signing this one, especially.”

Todd Gray, executive director-treasurer of the Kentucky Baptist Convention, of which Kentucky Today is a part, was also present at the signing. He said, “This is a chance for the citizens of the commonwealth to speak on the issue of abortion. We are a pro-life state, so it’s a chance for folks to come out and let their voice be known. I think it’s important for the bill.”

The measure will not appear on the ballot until the general election in November 2022, because there are no elections this year in Kentucky.