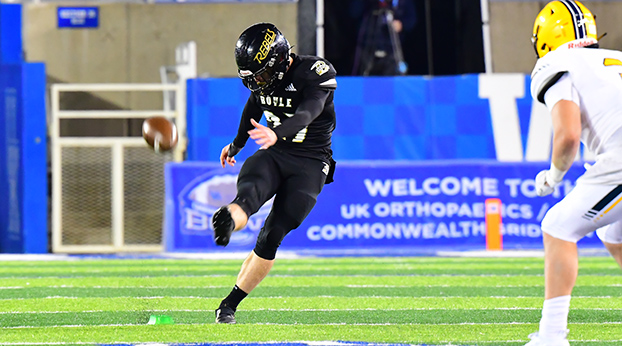 Spring break week turned into college commitment week for Boyle County junior Jackson Smith. He’s the top-rated kicker/punter in the 2022 recruiting class by ProKicker.com and is now headed to the University of Kentucky to kick where his father, Andy Smith, was an all-Southeastern Conference punter in 1999.

Jackson Smith had a lot of college options including Florida, Ohio State, Princeton, Oregon State, Mississippi State, more Ivy League schools, and others but wanted to be a Wildcat like his father.

“It’s the SEC, it’s close to him and he is going to a team that is on the rise,” Andy Smith said via phone from Florida. “I did not push him to pick Kentucky or make his decision now but I just think he realized this is a great opportunity. It takes the pressure off him, too.”

Andy Smith told UK head coach Mark Stoops last week that as an alumnus he was “super proud” of the way the coach was building UK’s program.

“We’ve always had talent (at UK) but just not the depth like the best teams in the SEC,” Smith said. “Stoops is changing that. Jackson sees that. I legitimately think Kentucky has a chance to compete in the (SEC) East the next few years.”

The timing is also right for Jackson Smith and Kentucky. The last kicker to sign with UK was Chance Poore in the 2018 recruiting class and most schools only offer a kicker and punter every four years. The Cats added punter Wilson Berry in this year’s recruiting class.

“It just timed out perfectly for him and the kids on the roster now and hopefully will work out for him to be a starter there,” Andy Smith said. “With all the COVID mess you are not able to visit schools. A ton of coaches have reached out to him via Zoom but he has grown up around Kentucky going to games and has been around the program. He sees what coach Stoops and his staff are doing.”

The Smiths also had inside information from All-American punter Max Duffy, who has worked summer kicking camps with Andy Smith and even coached Jackson Smith.

“Max is as honest as they come,” Andy smith said. “What he said all along is this is just a great opportunity and the coach Stoops you see is who he is. He is genuine.”

The Smiths also have a “good relationship” with UK quality control assistant Louie Matsakis, who works with kickers/punters.

“I like how he charts things in practice and the little stuff he talks about. He is a knowledgeable guy,” Andy Smith said.

Jackson Smith surprised his parents when he told them he was ready to commit to Kentucky. They were not expecting him to do it until closer to the start of his senior season.

Kentucky obviously has recruited Jackson Smith as a kicker but the door is not closed on him also punting even though his father knows how difficult it would be to do both in college.

“Jackson is a heck of a punter. We did ask if they are open to him potentially doing both down the road,” Andy Smith said. “They said the best guy wins the job. It’s difficult at a high level to do all three (punt, placekick, and kick-off) but they said if he won the job he would get it.

“I did everything in high school and then my freshman year at Western I did kickoffs and punts. At Kentucky, I was the punter and holder (for placekicks). You just never know until you get there but I know he excels at all three and will work his tail off.

Jackson Smith is not a typical kicker. His dad was tall (6-2) and lanky (180 pounds). Jackson Sith is 5-11, about 195 pounds. Jackson Smith has bench pressed almost 300 pounds and power cleaned over 250 pounds. His dad said he “maybe” cleaned 225 pounds when he was in high school.

“He is a lot stronger than I was at that age. He is at school every day at 5:50 a.m. working out in the mornings,” Andy Smith said. “That’s what it takes to get better.”

Jackson Smith is also not a typical kicker because he plans to be a full-time position player at Boyle this season. He plays linebacker and receiver/tight end.

“Jackson is a football player,” Andy Smith said. “I am old school. I know the initial thoughts are it’s a higher risk of getting injured if he plays a position but you can get injured playing basketball in the driveway.