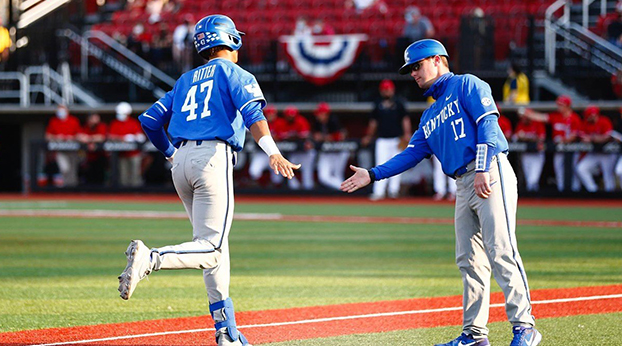 Ryan Ritter comes around third base after blasting a three-run homer in Kentucky's 11-7 win over Louisville on Tuesday. (UK Athletics photo)

When Ryan Ritter joined the University of Kentucky baseball team this season after one year at John A. Logan College in Carterville, Ill., 60 miles northwest of Paducah,  he was considered an elite defender, with his offense hardly being given a second thought.

But that is rapidly changing. The sophomore shortstop is proving he is pretty handy with a bat too, the latest example coming in the Wildcats’ 11-7 win over No. 7 Louisville (18-9) Tuesday night in Jim Patterson Stadium.

Ritter, a native of the Chicago suburb of Tinley Park, Ill., showed conclusively how he can impact a game on both sides of the ball.

The evidence: He drove in six runs with a three-run home run and a three-run double in his first two trips to the plate and turned in a trio of dazzling defensive plays as UK (19-7) snapped a three-game losing streak and beat a top-five opponent for the first time since defeating No. 5 Arkansas on May 5, 2019. It was also the Cats’ first win on UofL’s field since 2014.

UK coach Nick Mingione credited Ritter with changing the complexion of the game after he smashed the homer over straightaway centerfield to stake UK to a 3-0 lead, narrowly missed a grand slam an inning later, settling for the three-run double that put the visitors on top for good at 5-2, and prevented at least four Louisville runs with his infield wizardry.

First, Ritter ranged to the opposite side of second base on a ground ball and threw out Levi Usher, one of the fastest runners in college baseball and by far the leading base stealer in the ACC, to save two runs. Then he made a sliding stop-and-throw on a ball deep in the hole. Finally, in the ninth inning, he made a jumping stab of a line drive that saved another two runs.

Meanwhile, his big evening at the plate raised his batting average to .321, third-best on the team.

“We believe Ryan is going to be a top-round draft pick one day,” Mingione said Wednesday morning by phone from his office. “The reason why is not only his defensive ability but offensively. Even when we were scouting him we saw some things in his swing that convinced us he would hit and so far that’s been right. His defensive ability is through the roof and when you’re that good defensively and you’re that special you can change the game on that side of the ball.

“Sometimes we as baseball people think defense is the only thing they can do and that’s definitely not the case with Ryan. He’s got some really big hits for us against some really good arms. The defense is just so special I think sometimes our eyes are drawn to that, but obviously, he’s a special offensive player as well.”

Mingione credited assistant coaches Todd Guilliams and Will Coggin with contributing to Ritter’s progress but said Ritter is also a very willing student of the game.

“Ryan has shown up every day and tried to get better,” Mingione said. “There’s not a day when he’s not trying to get better and that’s a tribute to Ryan and the way he’s wired. I’ll tell you this, he’s a confident kid and he believes in himself, and our team believes in him, whether it’s defensively or offensively. The way he can impact the game on both sides of the ball was definitely evident last night.”

The Wildcats will need Ritter and everyone else performing at a high level to survive the remainder of their schedule in the loaded SEC. Starting with a series against LSU in Kentucky Proud Park, UK has 21 games remaining against league opponents, including consecutive weekend three-game series against No. 6 Tennessee, No. 12 Florida, No. 11 South Carolina, and No. 1 Vanderbilt.

“That’s definitely a perk of being at Kentucky, to play really good teams and play in the best conference in America,” Mingione. “Obviously, with those experiences, you need to learn, grown, and improve from them and I feel like we have.”

Mingione believes the win over UofL, UK’s first against a top-five team on the road since beating No. 5 Florida in Gainesville in 2017, should provide a boost for the LSU series and beyond. The victory came on the heels of the Mississippi State series, where the Cats battled the No. 5 host team down to the wire in the last two games, losing 3-2 and 4-3.

“Obviously, Louisville is a really good team and I think the rest of the country believes that too, looking at their national rankings,” Mingione said. “So any time your team can go on the road and get a victory like that it does a lot for a team’s confidence. For us to compete the way we did last night and come out victorious is definitely a good thing for our program.

“As I said from day one about this team, these guys really care about each other and they’re close, and every team is not that way for whatever reason. You can do all the same things with every team, but it doesn’t always work out that way. But this is a close team, a confident team and they believe in each other and they believe in our system of play. So I think they have now seen it for themselves that regardless of who’s in the other dugout if we do what we’re supposed to, we could and should play with any team and I think that’s important for 18-year-olds to know.”