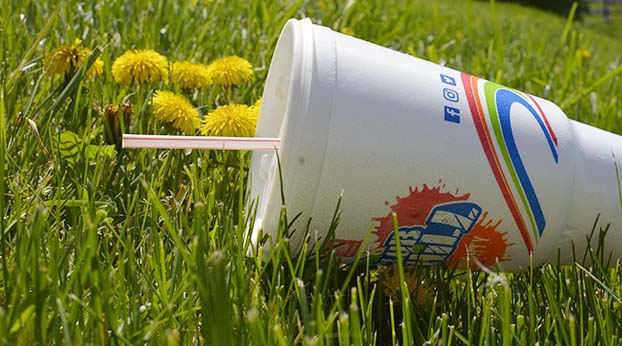 Litter on city streets and county and state roads has residents concerned.

Julie Baumgardner came before the Winchester Board of Commissioners meeting last week to complain about the unsightly mess.

Even with the daffodils in bloom, she said, the roads look ugly with all the rubbish scattered about.

“Colby is a dump,” she mentioned. “I’ve never been so concerned.”

Mayor Ed Burtner said part of the problem it’s so bad this year is because of COVID. The roadside cleanups were stopped to avoid the spread of the highly contagious and debilitating respiratory virus.

Burtner said Clark County Jailer Frank Doyle had hoped to restart the litter collection with inmates, but hasn’t, and in years past, citizen groups took it upon themselves to clean up sections of particular roads.

“It’s at a level I’ve never seen,” the mayor said.

Doyle said Monday he it is on his priority list to get his low-risk inmates working again on community service projects including the roadside cleanups, but he’s cautious because Montgomery County let their inmates work and ended up bringing COVID back into jail. He said some local jails are drafting plans for how to keep the inmates separated, but it’s still risky.

“I’m not going to try to outsmart the Department of Corrections” or the medical professionals, he said. “There’s no sense in trying to rush things.”

But the trash concerns him too, he said. He just hates driving along county roads and seeing all the garbage people have thrown out their windows, he said.

In response to a Facebook post about the roadside litter, Cora Heffner said she thinks the issue “isn’t that there’s more trash being tossed out than usual, it’s that it isn’t being picked up now, and part of it is that the inmates aren’t doing it.

Ernie Barnes said he agreed that is the problem.

Heffner said she had seen where somone dumped a mattress and box springs on U.S. 60, and there were fast food trash bags and wrappers on Goose Creek Road.

“Some people are so rude,” she said.

Other environmental issues were discussed at the meeting:

• The commission approved an emergency order to award a bid to The Allen Company of Winchester to repair a storm drain failure on Blanton Alley off Lexington Avenue at a cost estimated at $91,674.47.

• The city commission approved an application for an encroachment permit to plant trees on Interstate 64 exit ramps 94 and 96.

• The mayor issued an April 6 Arbor Day proclamation for Winchester.