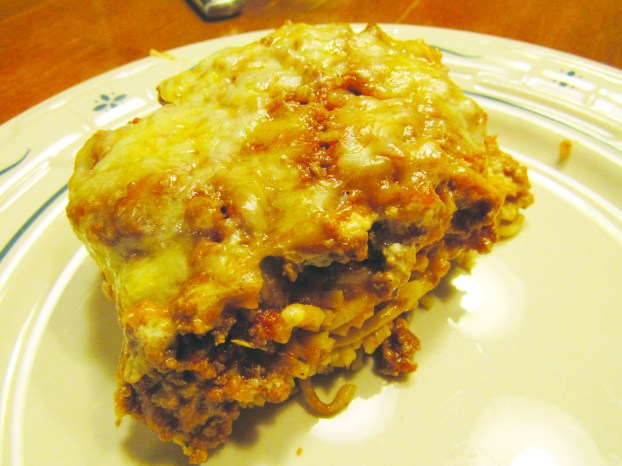 Cook spaghetti according to package directions; drain.  Meanwhile, in a large skillet, cook the beef, onion, and garlic over medium heat for 6-8 minutes or until beef is no longer pink, breaking up beef into crumbles, drain.  Stir in the spaghetti sauce, salt and pepper; bring to a boil.  Reduce heat, simmer, uncovered, for 20 minutes, stirring occasionally.

Bake, covered at 350 degrees for 25 minutes. Uncover; bake for 5-10 minutes or until the cheese is bubbly.

This recipe was torn from the February/March 2013 issue of Taste of Home magazine.  I wanted something for supper that would be easy and not involve lots of preparation or time in the kitchen.  I sifted through the top half of my “other meat” folder which is full of recipes I’ve saved over the years.  This recipe caught my attention because I’d spotted some jarred spaghetti sauce in the pantry while rearranging the shelves the day before.

About 4 in the afternoon I gathered the ingredients and got to work. I filled a large pot with water and turned the burner on, hoping it wouldn’t take too long to come to a boil.  While I waited for the water to boil I minced the garlic and set it aside so it could have time for all of the healthy properties to activate. It took less than 2 minutes to peel, the onion and then chop it with my handy chopper.  I scraped the onion off my cutting board into the pan with the ground beef and started browning it.

As the meat browned, I added the minced garlic. When the meat was no longer pink, I poured in the jarred spaghetti sauce and added the salt and pepper.  By this time the water was boiling and I added the dry spaghetti to the pot.  The meat mixture came to a small boil and then simmered for about 20 minutes.  I did stir it often just to make sure it wasn’t sticking to the bottom of the pan.

Sure enough by the time the meat and sauce mixture was done the spaghetti was out of the pot, drained, and in the 11 x 7 baking dish.  I’d mixed the cream cheese, sour cream, and green onions and spread on top of the cooked spaghetti.  I spooned the meat and sauce mixture over the top and then sprinkled on the shredded cheese.  I used a mixture of pizza cheese and mozzarella on top because that’s what I had in the refrigerator.

After covering the baking dish with foil, it went into the preheated oven and I cleaned up the little bit of mess I’d made.

I removed the foil from the baking dish after 25 minutes and 10 minutes later supper was on the table.

We sat down and Brad blessed the food and thanked God for all the blessings he has provided to us.  The casserole was pretty hot so we talked for a few minutes, giving it a chance to cool.

Spaghetti isn’t one of Brad’s favorite dishes since pasta has so many calories in it, but he doesn’t mind eating it occasionally so I was anxious to get his reaction to this dish.  We both agreed it was good and wouldn’t mind having it again.  You know I’m not a big fan of cheese but the amount on this dish didn’t bother me at all.  This dish reminded me a little of lasagna and it’s much easier and faster to prepare.

Of course, this recipe made more than then two of us could eat in a meal so we had it again the next night and it reheated just fine.

This recipe will be added to my self-made cookbook because I Nailed It!  I think it will be a great dish to take to one of our church potlucks, when we can start gathering again.

BY GLORIA YODER The Amish Cook (Editor’s Note: This is a two-part column from Gloria chronicling and celebrating the adoption... read more