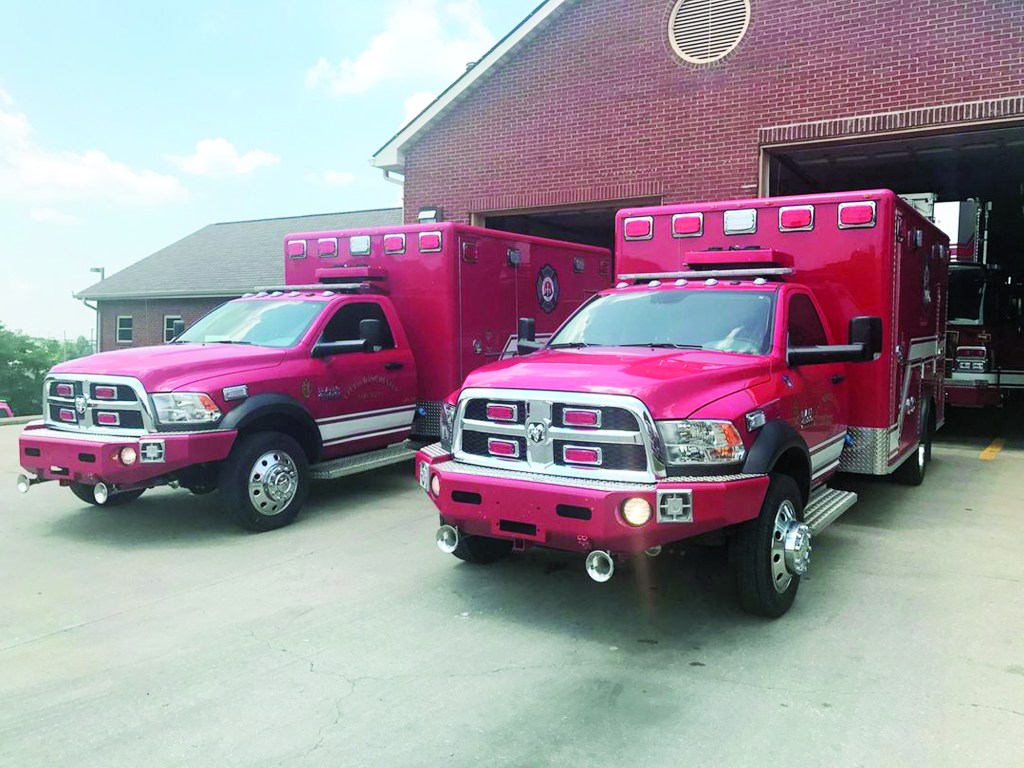 The governments of Winchester and Clark County have at last come to an agreement on changing their funding ratio for emergency medical services beginning this summer.

After meeting more than two hours Monday night at the courthouse, a committee made up of the chief executives of the two governments and two legislative members from each decided that starting July 1, the beginning of the 2022 fiscal year, Winchester would pay 61 percent of the ambulance and emergency medical service operated by Winchester Fire-EMS, and the county would pay 39 percent. What’s more, the amount the county pays would no longer be capped.

For the past 20 years, the city has paid 55 percent of the cost and the county 45 percent, and last year the county had negotiated a caveat that its portion could be no more than $450,000, regardless of the percentage.

“I think both sides were happy with the agreement,” County Judge-Executive Chris Pace said Monday night after the meeting.

He said he thought everyone on the committee agreed that “it needed to be modernized” because 55/45 was no longer fair, given that 69 percent of the runs were now inside the city limits and the city and its tax base have grown more.

“The revenue streams have changed significantly since it was last amended over 20 years ago,” the judge-executive said.

“We agreed to remove the spending cap so that the city can budget appropriately from here on out,” he explained.

Reaching a compromise, however, wasn’t easy.

During the last meeting of the Winchester/Clark County Joint EMS Committee in March, Magistrate Chris Davis had insisted that there be a cap, but suggested raising it to $500,000. He also indicated he would be open to changing the percentages going forward. That proposal ended in a stalemate with the three city representatives, Mayor Ed Burtner, and commissioners Jo Ellen Reed and Ramsey Flynn, voting no and the county members, Pace, Davis and Magistrate Greg Elkins, voting in favor.

According to Pace, this time Burtner proposed that the city pay 53 percent and the county 47. Reed suggested 60/40, Elkins 65/35, and the two sides finally settled on 61/39 with no cap on the county’s portion. That agreement will be in effect throughout the 2022 fiscal year, from July 1 of this year through June 30, 2022.

The extra $13,000 will come from money the city agreed to contribute from its CARES Act federal funding for coronavirus relief.

“The city took a long look at the question that was raised at the last meeting about the effect of CARES funding and essentially agreed with the county that there needed to be a credit back against the county’s EMS portion,” Burtner said.

The two sides agreed that amount would be $128,000 of the money the city had received. That credit will reduce the amount the county has to come up with by June 30 to pay the city for its share of the funding, Burtner said.

As part of the motion by Burtner and Reed, the committee also agreed to continue meeting regularly.

The next meeting is tentatively scheduled for May 12 at 6 p.m. at City Hall.

During that meeting, Burtner said, the members will look at rates charged for EMS runs and consider what to do about the current one-year contract with Breathitt-Wolfe County EMS to handle most non-emergency patient transfers.

“We have to make the decision about what to do about Breathitt-Wolfe by the end of June,” the mayor said.

As for the rates, one problem, Burtner said, is that so many ambulance runs are paid for by Medicare or Medicaid, and the reimbursement rates often to not cover the costs.

“You can charge whatever you want to, but Medicare and Medicaid are only going to reimburse what they want to reimburse,” he said.

Burtner said that during the meeting Monday, the members looked at ambulance run volumes inside and outside the city, and discussed LifePoint hospitals having their own ambulance service at many hospitals across the country. Clark Regional Medical Center is owned by LifePoint, but Burtner said “the information shared with us by a member of the advisory committee at an earlier meeting was that LifePoint was not interested in doing that” at Clark Regional, he said.