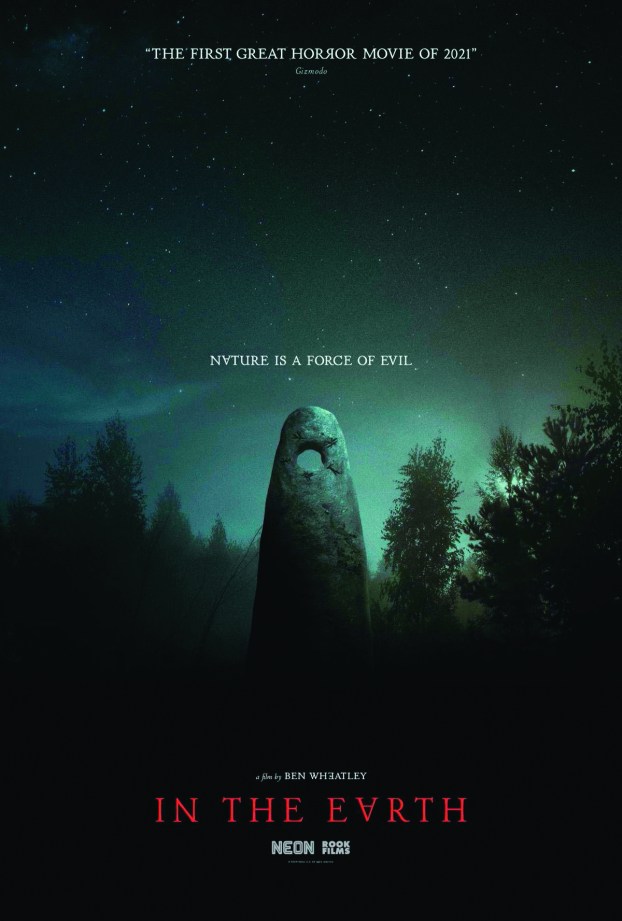 ‘In the Earth,’ on the screen

A year has come and gone as we still are feeling the effects of living in a world ruled by COVID- 19 pandemic protocols. Vaccine numbers are up, and so are the positive rates in some states and countries as we try to return to a state of normalcy that were accustomed to pre-COVID and all of its pandemic political pandemonium to which we were subjected.

Our time in quarantine was an opportunity for self-improvement spiritually, physically and professionally if you were some of the few that used your time wisely. Today’s flick is a product of what a driven quarantined person can do when given lemons with the results not being lemonade, but the low-budget indie pandemic UK infused horror film, “In the Earth” (2021).

“In the Earth” is set in a time of a global pandemic while a search is ongoing for a cure to the virus when scientist Dr. Lowery (Joel “Games of Thrones” Fry) and park scout Alma (Ellora “The Split” Torchia) venture deep into the woods. While performing a routine equipment run a in search of a cure, the determined duo stumble upon a woodsman living in the thick of it off the grid, Zach (Reece “The League of Gentleman” Shearsmith) and discover the horrors of the forest come nightfall.

“In the Earth” was written and directed by Ben “The ABCs of Death” Wheatley. Wheatley wrote his micro-budgeted fright film two weeks after the UK quarantine began last year and was filmed over a period of 15 days in secrecy in August 2020.

“In the Earth” had its world premiere at the Sundance Film Festival in January of 2021 and has been receiving favorable reviews from a majority of critics due to its pacing, unnerving hallucinatory cinematography and its unforgiving display of memorable gore deeply rooted in dark humor.

Though it is only April, this is the first of many films that will be addressing the fears of humanity during a pandemic to cash in on the contemporary COVID cinema craze, which will connect with a majority of humans within the past year.

“In the Earth” is sure to please horror fans, those who are obsessed with COVID-19 related materials, and low-budget film aficionados. Resembling the daily dire COVID updates of our communities last year, “In the Earth” does become more unsettling as the scenes progress, and viewing this film may be unsettling for those who are sensitive by nature or unfortunately lost a loved one to the virus.

Through its twisted humor, gore and visual style, “In the Earth” represents the minimum number of helpers within our humanity who always sacrifice their time, and lives, to deal with a problem by trying to correct the grave issues at hand for a majority of the rest of us.

If you receive anything out of this column or do decide to view “In the Earth,” remember that this was shot during a time of great restriction to individual free movement and a general fear felt internationally from people all around the globe. Wheatley’s cast & crew did use their time wisely in the middle of lockdowns, quarantine and a surge in positive cases around the world. Some of us ate more, slept more, binged streaming services more, and complained a lot more than we already do.

This film is a positive response of the cast and crew using their time in a constructive manner rather than just sitting on the sidelines waiting for all of this to blow over.