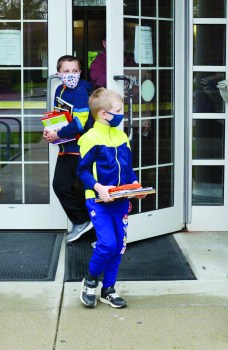 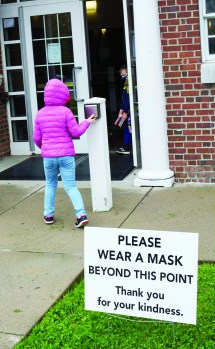 A sign at the entrance to the Clark County Public Library reminds patrons that they are expected to wear masks for the safety of others. (Photo by Randy Patrick) 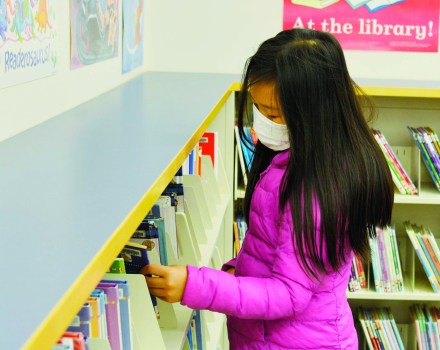 Grace Lin browses the bookshelves in the children's section of the Clark County Public Library Wednesday. (Photo by Randy Patrick) 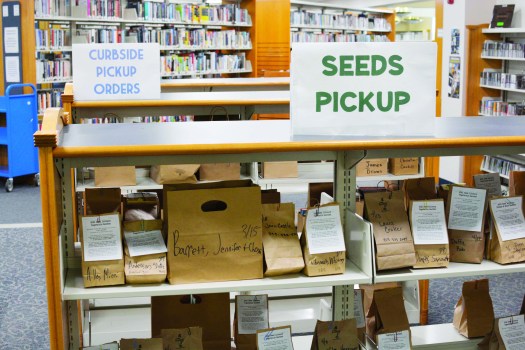 The library now has a pickup section for books and other materials, and another one for seeds. People can reserve books or DVDs, have the staff check them out over the phone and come in, grab them and go without any waiting. (Photo by Randy Patrick)

The Clark County Public Library has opened its doors again, although it never really closed.

For the past year, during the coronavirus pandemic, the library has continued operating in novel ways, offering a variety of virtual services, including online classes for children and adults and streaming movies, curbside pickup of books and DVDs and even delivery of packages to homes and daycares.

Now, though, patrons can come back inside and look around.

The library reopened to in-person service March 22, and though it was a “soft opening” without a lot of publicity, patrons have been steadily returning.

“The first Saturday we were open, I was the quarantine officer, and we had 60 people come in three hours, but we never had more than nine people in the building at the same time,” Julie Maruskin, executive director of the library, said Wednesday.

“All of our patrons have been so nice and so understanding of many of the changes,” she said.

COVID hasn’t disappeared, and so the library has taken extra measures to keep its patrons and staff safe, including limiting capacity to 10 people at a time with exceptions, such as a small child with a parent or a caregiver for a person with disabilities.

Visitors and staff are expected to wear masks, and those who work at the circulation or reference desks are behind polymer barriers, for their protection as well as the protection of visitors.

Books, DVDS and other materials have always been cleaned with alcohol when they are returned, but during the virus outbreak, there has been a “triple-layer cleaning process” that includes quarantining the books for an extended period before they go back on the shelves. That may be relaxed in the future now that it’s known the virus is far less likely to be transmitted by surfaces than through the air by respiration.

There have been many positive changes since the library was closed for in-person service last spring, Maruskin said. There is new, brighter, “greener” energy-efficient lighting throughout the building, for example, and expanded shelving for materials.

While there were few people in the building at 370 S. Burns Ave., workers were able to move around freely and get work done more efficiently.

“For us, it was much like reopening after a renovation,” Maruskin said.

Visitors will notice changes right away when they walk in. The computers have been relocated, as has the new books section, and where the new books section used to be, there is a pickup area for those who have checked out materials before arriving to grab them and go. And for the library’s heirloom seeds enthusiasts, they can pick up brown paper bags of seeds as well.

The library has developed a “multi-faceted outreach service,” Maruskin said, that includes not only an old-fashioned bookmobile service, but other ways to make borrowing books, CDs, DVDs and other items more convenient.

For the time being, Maruskin said, there won’t be any in-person programs inside the library. Those will remain virtual, although the staff intends to do “library-on-the-lawn” activities as part of its summer reading program when school’s out.

They also intend to expand their hours of operation. Currently, the library is open from 10 a.m. to 2 p.m. and 3 to 6:30 p.m. Monday through Friday and from 11 until 2 on Saturday. On weekdays, the library is closed for an hour for cleaning, and bathrooms are cleaned again at the end of the day, but even between 2 and 3, they will still do curbside delivery.

The new, expanded hours are expected to be announced soon.