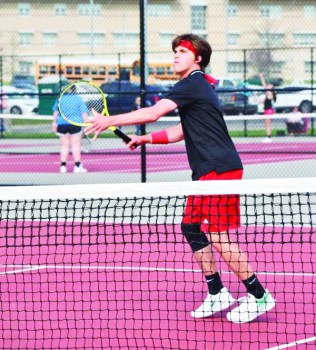 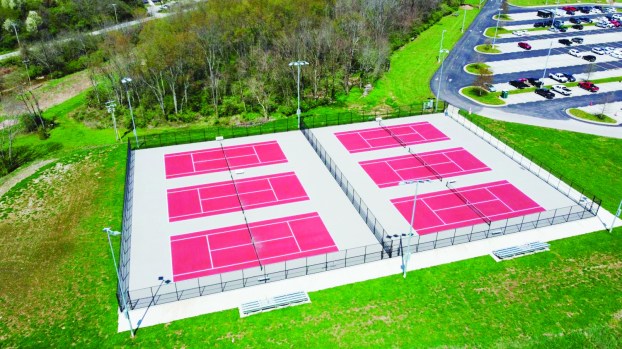 The new tennis courts at GRC are home to the Cardinal teams. - Drone photo by Zeke Ross

These sights and sounds have never been seen or heard on George Roger Clark’s facility, until this year.

For the first time, GRC tennis has a home.

Since the establishment of GRC high school, in 1963, tennis has never been able to play on its own home courts. These teams have always been forced to play off school grounds.

The bell rings, and student athletes would have to sprint out of class to find their ride. With practice starting at 4:00 and the busy after school parking lot, these players would be lucky to make it in time to change for practice.

With these long awaited new courts, going to practice becomes simple and less stressful. Student athletes no longer have to walk into school as a student, and sprint out as an athlete.

With on-site courts, they are able to maintain the idea of being both a student and an athlete, and not having to separate their two activities from each other.

Being able to play at home is important no matter what kind of team you play for. Not only is it helpful to promote team spirit, but it also gives the team an identity in their school.

When a player stands on their court of field, and their school is not in sight for miles, school spirit and pride becomes detached from each athlete, and ultimately the team. Even though an on sight facility doesn’t make a team, athletics greatly benefit from a close fan base and support from their school.

Advantage- the one word that has always been missing from “home court advantage”- has finally returned to GRC tennis.

Home court has never felt so close to home.

What players are saying

I’m glad I get to spend my first season on the new courts! It is definitely an upgrade from the old ones.

The new courts are very nice. I’m excited to be a part of the first team to play on them. My favorite part about them is that they’re on campus, so matches have more of a home feeling. Also, coloring them red was a good touch!

I’m looking forward to playing our first match this year on the brand new courts. It’s a blessing to be able to have a season this year and be the first ones to play on the brand new courts and cheer on my teammates. Our high school is bigger than most colleges and we have very nice facilities and we have great  coaches to help us get better everyday at practice and improve at the game we love to play. I love a can of fresh new tennis balls!

The new courts are a blessing for us to have! Without the cracks and blemishes the old courts have, it makes practice a lot easier! I’m very excited to get to play on the new courts and improve as a team throughout the season.

Being able to play on new courts and reflecting on the past years and seeing how much we have come makes me even more excited for matches to come.

I love that we have our own courts to play on this season! It is so nice to be able to have more courts than we have been able to use in the past. I also love that the courts are at GRC. It makes playing on the new courts feel more at home and gives us a new and awesome place to play.

I’m very excited about the new courts and feel very fortunate that I get to use them for my last tennis season. I feel that with these new courts we will have more people join and the tennis team will become even better in the years to follow. I can’t wait to see how the team grows with our new facilities.