Coen has more than half of UK’s revamped offense installed 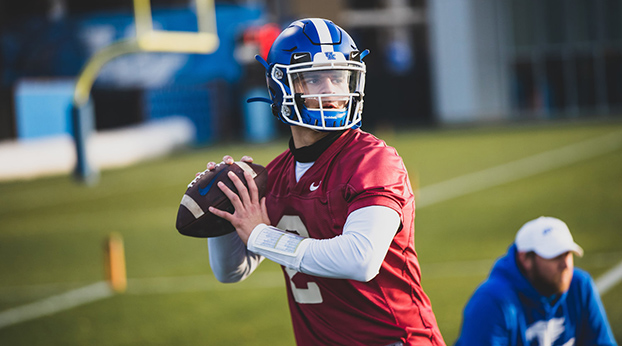 Kentucky offensive coordinator Liam Coen has been pleased with the way the Wildcats have picked up on his offensive schemes going into the final week of spring workouts.

“I was just excited to see the guys run around and make plays,” Coen said Tuesday. “I think every receiver but one caught a pass. A lot of guys did some nice things. It was nice. We kept it pretty simple from a gameplan standpoint and just calling plays that we executed in practice and they knew.”

Like the players, Coen was glad to get away from the daily grind of drills and repitition.

“Guys just ran around and made plays. It was fun to see guys get excited on the sidelines. There are always things to clean up, especially in some of the running game and things like that. It’s just a lot of bodies moving around. But we did some nice things overall. I was happy with it.”

The Wildcats will close out the spring with a scrimmage Saturday and Coen plans to install more schemes, including red-zone offense. Scoring inside the 20-yard line was an issue for the Wildcats a year ago. Coen hopes quarterbacks Joey Gatewood and Beau Allen can help improve the team’s performances in the red zone and said both players have been productive this spring.

“I thought they commanded the whole show pretty well (Last Saturday),” Coen said. “They did some nice things in terms of making plays off schedule. Those are the type of things you can’t really imitate in practice. Not that the quarterbacks were live, but you get a little bit more of a live rush and a live look at those things. When the throws were in timing and rhythm, I thought they executed those at a high level.”

Coen added the Wildcats made some big plays, especially in the passing game, an area of concern for the Wildcats last season.

“I thought we threw and caught overall on the day pretty well. Had a couple of explosives. Just being sharp, in and out of the huddle, getting the signals, good clean huddle, good break, and everybody knows what they’re doing, it starts with the quarterback. I thought they did a nice job on Saturday.”