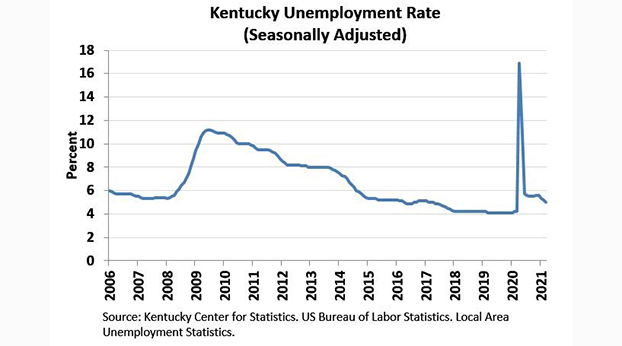 There were some possible signs of an improving economy on Thursday. Kentucky’s jobless rate in March declined from the previous month as did the number of jobless claims nationwide.

Kentucky’s seasonally adjusted preliminary March 2021 unemployment rate was 5%, according to the Kentucky Center for Statistics, part of the Education and Workforce Development Cabinet. That was down 0.2% from February, but up 0.8% from the 4.2% recorded for the state one year ago, before the COVID-19 pandemic really took hold with mass lay-offs.

Meanwhile, the U.S. seasonally adjusted jobless rate for March 2021 was 6%, down from the 6.2% reported in February 2021, according to the U.S. Department of Labor.

They announced Thursday that the number of Americans seeking UI benefits was 576,000, a post-COVID low and a hopeful sign that layoffs are easing as the economy recovers from the pandemic recession. That represents a drop of 193,000 from the previous week, and down from the 900,000 filings in early January.

In Kentucky, the leisure and hospitality sector, which has been especially hard-hot during the pandemic, lost 800 positions between February and March, a decrease of 0.5%. This sector was down 31,000 jobs or 15.7% compared to March 2020. The accommodations and food services subsector fell by 600 jobs in March while the arts, entertainment and recreation subsector lost 200 positions.

“As capacity restrictions on restaurants were eased in late December, employment in the accommodations and food services sectors improved,” said Clark. “However, increases in employment did not carry over into February and March. This could indicate that businesses in this sector are continuing to struggle.”

Kentucky’s civilian labor force was 1,990,548 in March, according to the Labor Cabinet.

Civilian labor force statistics include nonmilitary workers and unemployed Kentuckians who are actively seeking work. They do not include unemployed Kentuckians who have not looked for employment within the past four weeks. Since the requirement to seek employment has been lifted during the pandemic for UI claimants, that number could be inaccurate.