UK recruit Wallace almost too good to be true 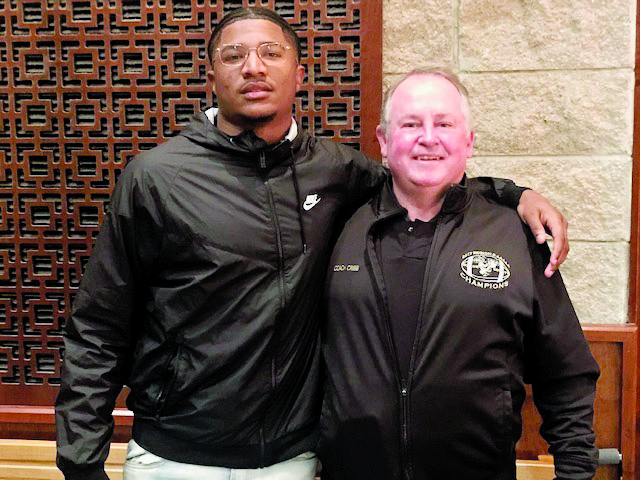 Coach Ken Cribb, right, says Trevin Wallace, left, is a special player because of his size, speed, and football IQ.

Coach Ken Cribb worried what to say when college recruiters asked him about Trevin Wallace.

Cribb didn’t have anything to hide. He just worried coaches would believe Wallace was “too good to be true” if he was honest.

“If coaches could order a player off a computer checklist he would have all you wanted. He is tall at 6-2. Weighs 225 or 230, and is  yet still crazy fast. Actually unbelievably fast. He’s been timed at 22 miles per hour,” Cribb said. “He won the state weightlifting championship (his final power clean was 335 pounds) . In track, he can high jump, long jump, sprint. He can do it all. In football, he can play either side of the ball.”

“Trevin is very, very special,” Cribb said. “I always told coaches I was reluctant to even say about him being a Boy Scout because he has such high character. Usually if you say that coaches will think you mean is a great kid but not a great athlete. But he’s well dressed, well spoken, great character.

Wallace played linebacker for Cribb at Wayne County (Ga.) High School and signed in December to play his college football at Kentucky.

Wallace hurt his ankle his junior year and missed most of the season, one reason he was unknown to many going into his senior season. He had just moved to defense his junior year — “He was amazing on offense but our defense was struggling and needed help,” Cribb said.

Wallace was a star on Wayne’s freshman team  but was not a “superstar.” He played on the varsity team as a sophomore and his coach started seeing “signs of brilliance” from him.

“He caught a ball before half of one game. He just went up as high as he could, got the ball and walked into the end zone,” Cribb said. “He had not gone from adolescent to adult then. He is definitely an adult right now and finally flipped that switch to greatness.”

Cribb said Wallace’s final high school game was the best game he’s seen a player have in his 33 years of coaching in South Carolina and Georgia. He was forced into duty at quarterback and ran for 384 yards against the No. 1 seed in the playoffs.

“We were down 27-25 and he scores to win the game but the officials took about five minutes to decide he fumbled before he got into the end zone,” Cribb said. “But that game he played every snap at linebacker, returned all kickoffs and punts and played quarterback out of the night. It was incredible.”

Cribb didn’t want to take Wallace off his offense but the coach “sacrificed” and the move paid off.

“He made an immediate impact. Our defense got really good with him,” Cribb said. “We had him at safety and he would be on the edge and shut down the whole side of the field. I still can’t tell you where his best place to play is but I think he really enjoys linebacker.

“A lot of college coaches were really impressed with how quick he adjusted to the ins and outs of playing linebacker. His IQ is really high. He’s just a great student. He reads keys and gets there because he is so fast.”

Cribb said Wallace works out daily and also still finds time to work at the local McDonald’s where his mother is the manager. His father coaches rec league football.

“He’s just a good kid, a hard worker,” Cribb said. “He’s always smiling,  never complaining. He’s just a happy go lucky kid that everyone likes unless you have to play against him.”