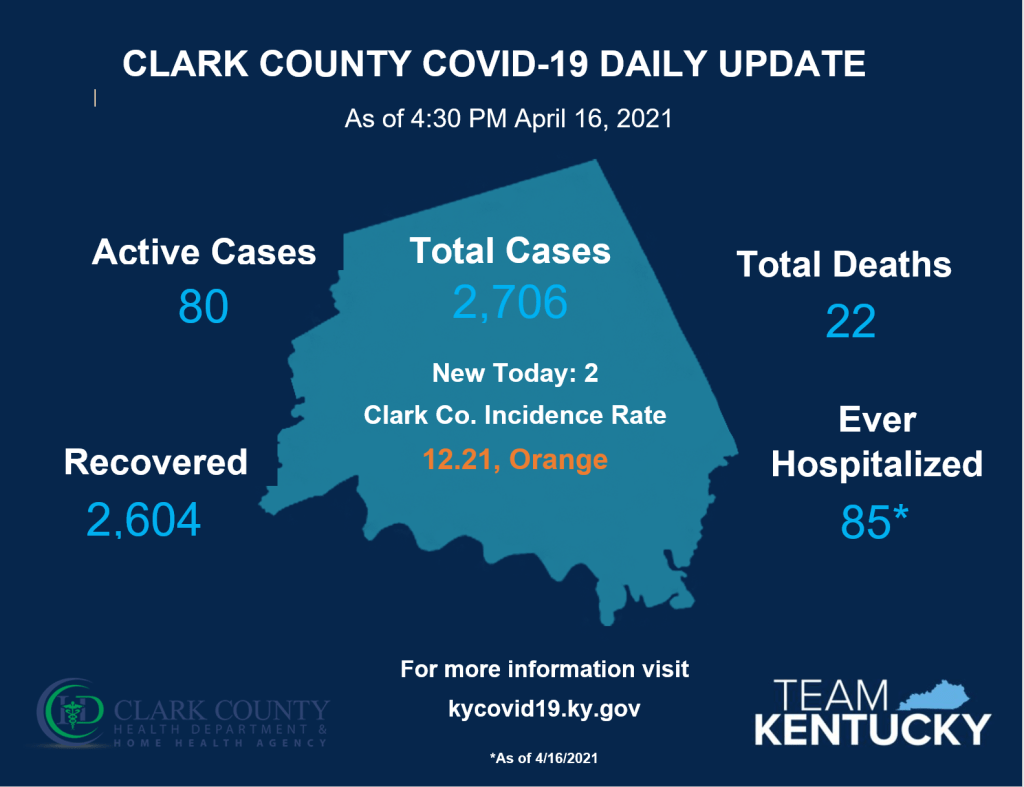 On the last day of March, the community’s COVID-19 infection incidence rate dropped to 9.06, putting it in the yellow category for the first time since the Clark County Health Department began issuing its daily reports in October of last year. But it only lasted a day.

On April 1, 11 new cases were reported, and the the rate climbed back into the orange, or accelerated spread category, with 11.14 cases per 100,000 population. Over the next several days, it continued to rise, to 18.12 on April 9, before steadily declining again.

In all, according to the Health Department, there have been 2,706 cases in Clark County with 22 deaths related to the coronavirus.

Also on Friday, the Health Department, for the first time in months, released new numbers on local hospitalizations because of COVID. The daily report had been listing 47 each day since Dec. 5, with a note that it wasn’t up to date. On Friday, Public Health Director Becky Kissick reported that as a result of ongoing records review, the department was reporting that an additional 38 patients had been hospitalized for COVID since Dec. 5, bringing the total number ever hospitalized to 85.

Last Tuesday, the department reported that the Food and Drug Administration and the Centers for Disease Control and Prevention had warned about rare instances of blood clotting involving women who had taken the Johnson & Johnson single-dose vaccine.

“Out of an abundance of caution, the administration of this vaccine is being suspended,” the Health Department stated.

The department had mostly been administering the Moderna vaccine.

On Friday, Gov. Andy Beshear reported in his daily press conference that more than 1.6 million Kentucky adults have had at least one dose of a COVID vaccine. He also reported there were 714 new COVID cases and 10 new deaths from the virus.

The state’s positive test rate as of Friday had risen to 3.51 percent.