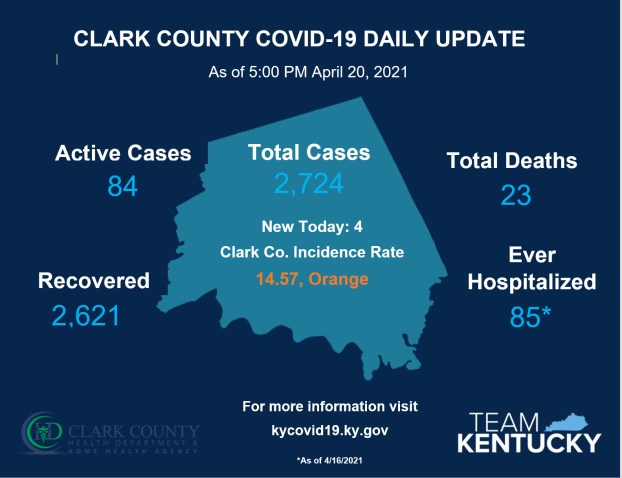 The Clark County Health Department on Tuesday confirmed its 23rd death for which COVID-19 was a contributing factor. It was the first death in the county from the respiratory illness in over three months.

The victim was a 78-year-old man and a member of the community, not a nursing home resident.

“Our thoughts and prayers are with these families during this very difficult time,” Public Health Director Becky Kissick said in announcing the death as part of the department’s daily update on the coronavirus.

The last time before this week that new deaths were reported in the county were in mid-February. On Feb. 11, the department reported the 20th death, and the next day, it reported two more. The number had been at 22 until Tuesday.

Eighty-five people have been hospitalized locally with the virus.

The incidence rate Tuesday was 14.57 percent per 100,000 population for Clark County.

In his daily press conference Tuesday, Gov. Andy Beshear reported 609 new cases and seven more deaths, bringing the total in the state to 6,360 since the pandemic began. The state’s list did not include the death from Clark County, indicating a delay in reporting.

Statewide, 419 people in Kentucky are currently hospitalized with the virus, 121 are in intensive care, and 48 are on ventilators.