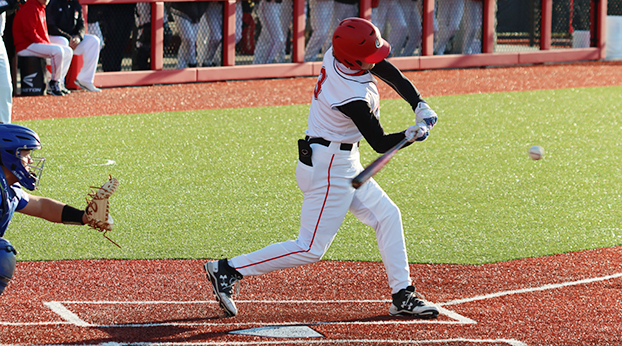 Freshman Brady Davis connects with a pitch for the Cards in their 6-5 win over East Jessamine. - Photo by Jon Paul Martin

GRC baseball squeezed out a 6-5 win after getting a late run against the East Jessamine Jaguars on Thursday night.

Traffic delays caused a late start and cold temperatures affected both teams during the contest. East Jessamine pulled out to an early lead in the first inning, scoring three runs off big hits by Williams and Mcelfresh.

The Cards went into the fifth inning down by four runs when freshman Brady Davis nailed a drive over the fence to tie up the game.

In the sixth inning, GRC pulled out two more runs, taking the lead and keeping the Jaguars in check. East Jessamine was unable to answer in the seventh as Kolby Brannock threw the last strike for the Cards. Brannock gave up one run on one hit with no errors.

Sophomore Tanner Moore allowed no runs off one hit.

The Cards are at home on Saturday facing Great Crossing, and are currently 1-1 in season play.