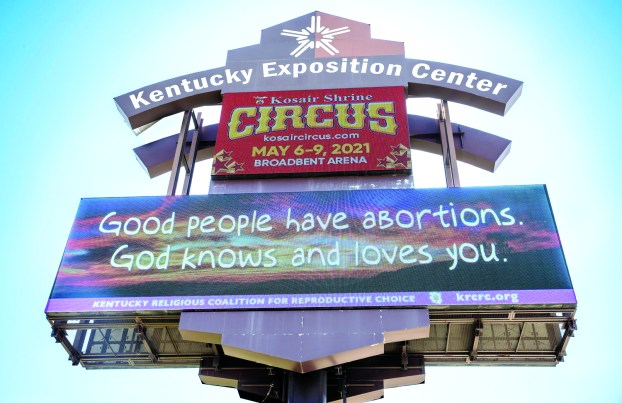 A Kentucky religious organization born out of ties to Planned Parenthood will for the next two months be displaying billboards supporting abortion in three Kentucky cities.

The Kentucky Religious Coalition for Reproductive Choice paid for the digital billboards that are on display at the Expo Center in Louisville and in Nicholasville and Paducah.

The rotating messages on the billboards say:

“Walk in my shoes before you judge my abortion.”

“Good people have abortions. God knows and loves you.”

“Abortion: A personal decision between you and God.”

Katey Zeh is the CEO of the Religious Coalition for Reproductive Choice nationally, which is made up of liberal religious leaders. She told Religion News Service that her call to ministry came while working within Planned Parenthood.

Zeh is connected to the Clergy Advocacy Board within Planned Parenthood that advocates for abortion. Many of the coalitions are located in the South or in states controlled by Republicans. They are described as “dedicated clergy and faith leaders from different denominations and communities throughout the U.S. who work with Planned Parenthood at the national and state levels to further the goal of full reproductive freedom for all women and men,” according to the Planned Parenthood website.

“As a clergy person who discovered my call to ministry within a Planned Parenthood, it was a no-brainer,” Zeh said in a statement to RNS.  In another interview, she had said, “I really felt my call to ministry while volunteering at a reproductive health clinic that performed abortion services.”

Zeh is identified as a member of Pullen Memorial Baptist Church in Raleigh, North Carolina, which is the church that ordained her. It is a Baptist church, but not one affiliated with the Southern Baptist Convention. Pullen wax expelled by the SBC because the church was conducting same-sex unions in 1992.

The scrolling messages the billboards are delivering in the Kentucky cities is a “misuse of God’s name and misrepresentation of His character,” said Dr. Todd Gray, executive director-treasurer of the Kentucky Baptist Convention.

“Exodus 20:7 in the Bible teaches that the Lord will not hold guiltless the one who uses His name in vain,” Gray said. “These billboards being planned by The Kentucky Religious Coalition for Reproductive Choice imply that God condones abortion. To imply that the God of the Bible is in agreement with the taking of innocent human life through the human rights atrocity of legalized abortion is clearly a misuse of God’s name and a misrepresentation of His character.”

Gray said those who made the decision to have an abortion should also know there is forgiveness from God available through the cross and resurrection of the Lord Jesus.

“Christians are able, because of the grace that has been extended to us by Christ, to condemn the horrific practice of abortion while at the same time providing care and compassion for women and men who are living with the guilt of having made that choice already,” he said.

The Rev. Diane Snowa, a board member of the Kentucky Religious Coalition for Reproductive Choice and spokesperson for the campaign, said more than 100 donors contributed $8,000 through a Go Fund Me account. The cost for the digital billboards was $12,000.

“For many Kentuckians who have had an abortion – a medical procedure one in four American women will have had by age 45 – this may be the first time they’ve ever heard anything other than that God would disapprove,” Snowa said.  “Our message is of a loving God who understands, and who offers free will. Those choosing abortion deserve compassion and love, not shame and harassment.”

“Kentucky Right to Life and ProLife supporters around the commonwealth do not disagree with the statement on the Kentucky Religious Coalition for Reproductive Choice (KRCRC) billboards that say ‘God loves women who have had abortions.’ But we certainly do not agree with their intent or the philosophy of KRCRC,” she said.

“Pro-life or pro-abortion, no one is the gatekeeper of God’s love, mercy, and grace! The pro-choice organization erecting the billboards targets women impacted by abortion yet fails to provide the women and men who have experienced abortion any information or resources on post-abortion healing.”

Wuchner said  Kentucky isn’t the only state being targeted.

“Organizations and groups supporting abortion have committed to a goal of de-stigmatizing abortion, by lifting up positive messages.,” she said “These billboards, attesting to God’s affection, in a sense, present a half-truth and only half of the capacity of God’s love, setting aside the unborn child whose life and humanity is extinguished by abortion. That precious unborn child, created in the image of God, is also the recipient of God’s constant love.”

Wuchner said Kentucky Right to Life has always been, and will always be, unwavering in support and love for a mother and her child, for the mother and father facing a difficult situation and contemplating abortion, and for the woman who has had an abortion.

“God is the author of life and our mission and ProLife work is a reflection of God’s love,” she said. “We believe in the intrinsic value and dignity of every life and that all life is sacred. We believe one cannot love the child without loving the mother and that is why support after abortion and post-abortion healing is a critical component of the pro-life mission, movement, and ministry.”

In the November 2022 general election, Kentuckians will have the chance to weigh in on the abortion issue after the General Assembly passed legislation that offers a constitutional amendment on abortion. It states: “To protect human life, nothing in this Constitution shall be construed to secure or protect a right to abortion or require the funding of abortion.”

There is no election this fall in Kentucky.

Vanessa Bullock of Winchester gets her second shot of the Moderna vaccine from Shaundra King, a nurse from the Clark... read more