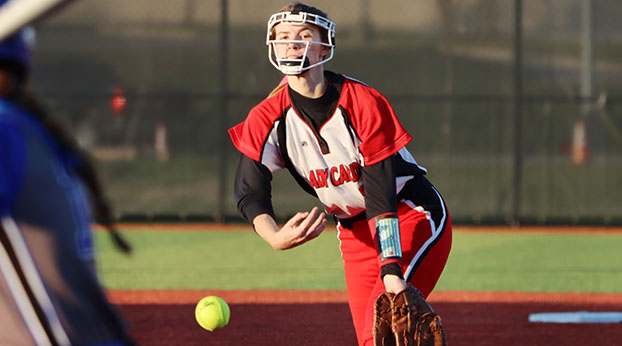 GRC’s Emily School pitched an impressive game maintaining a in game ERA of 2.0 over 7 innings. - Photo by Jon Paul Martin

GRC Lady Cards softball suffered a loss to Estill County Thursday at home in what became a battle of the pitchers.

GRC’s Emily Schooler struck out 15 at the plate, while Estill’s Emma Winkle snuck three more by at 18.  The rule of threes didn’t just stop with pitches, in the final, Estill bettered GRC by three runs. Making the final score 3-0.

Offensively, GRC’s Kendall Harrison and Addison Rogers both had one hit, but the Lady Cards were unable to convert those to runs.  The loss takes GRC to 8-5 for the season and 2-1 in district play.
The Lady Cards hit the road on Friday at Corbin where they face a team almost statistically mirrored to themselves.
You Might Like

GRC baseball falls to Estill on the road

By Jon Paul Martin George Rogers Clark had the upper hand on hits in the Varsity only contest on Wednesday... read more