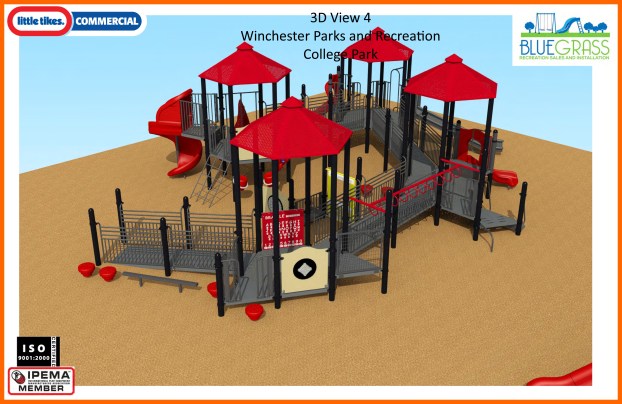 This is an artist's concept of what part of College Park's new playground equipment will look like.

Parks to get new playground equipment

College Park will have a completely new playground this summer, thanks in part to a grant from Little Tikes, the manufacturer of the equipment.

Last Thursday the Clark County Fiscal Court members unanimously approved the use of $49,160.50 from its Community Fund to pay for its half of a Winchester-Clark County Parks and Recreation match.

That fund is money the county has from the sale years ago of the old Rockwell factory property and is not taxpayer dollars.

The Winchester Board of Commissioners earlier in the week discussed its intention to provide its share of the funding, but it hasn’t voted on it yet.

The local governments are purchasing the equipment from Bluegrass Recreation Sales and Installation for about $100,000, according to Parks Director Jeff Lewis, who was at the Fiscal Court meeting last Thursday. Little Tikes will provide a grant of another $100,000.

“It really couldn’t have worked out any better for us,” Lewis said. “It’ll be a complete replacement of the playground.”

Lewis said that the price doesn’t include the cost of installation, but that cost will be much less than it otherwise would be because Parks and Rec staff can do some of the work.

The new equipment will be all metal, and will replace the old wooden equipment that has been at College Park for many years.

“College Park has one of the four remaining wooden structures in the state of Kentucky. This would take us from being (one of the last) to one of the first,” he said.

In response to a question from County Judge-Executive Chris Pace, Lewis said the metal won’t get hot and burn the children.

The metal should also reduce the prevalence of carpenter bees in the park, he told Pace, and, he said that eventual replacement of the old railroad ties used in the park should further reduce them.

One of the members pointed out that not only is the playground equipment handicapped accessible, but part of it is wheelchair accessible, and that there are few in Kentucky that are.

Members and the audience got a chance to see on the overhead screen an artist’s image of what the new equipment would look like.

There are two different renderings, one that shows the equipment in green and yellow, the Winchester-Clark County Parks and Recreation colors and the other in red and black, the colors of George Rogers Clark High School and Robert D. Campbell Junior High.

“A lot of people like the red and black because it’s GRC’s colors,” Lewis said, adding that he thinks it looks “a little nicer.”

Pace said the old equipment is “dilapidated” and “has become a hazard,” and that the new equipment is a good use of the Community Fund money.

“That park gets used by thousands of kids,” he commented.

Magistrate Robert Blanton said he would like for half of the county’s part to come from general funds so that the county government has “skin in the game,” but Pace told him that wouldn’t pass.

All members, including Blanton, then voted to approve the appropriation.