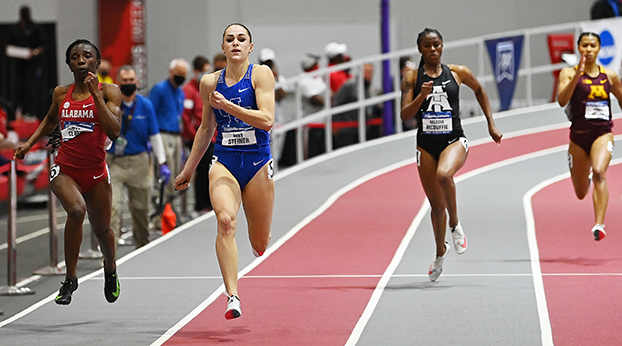 UK’s Steiner was a two-sport star in high school

Colleges started recruiting her to play soccer when she was only a high school freshman before a couple of years later she started to get offers in track because her times were so fast.

“I was basically picking colleges that were going to let me do both sports,” said Kentucky junior Abby Steiner. “A lot of schools did not have an issue with me doing both.

“I played soccer for 15 years and the one I have done the longest but my senior year of track I was running really well,” Steiner said. “After my senior year, it built my confidence with track and I saw my potential with that. I knew I would regret not doing track in college.”

She was right. Steiner committed to UK in 2015, the fall of her sophomore year, as a dual-sport athlete and set two Ohio championship meet records her senior year. She did both sports at the University of Kentucky her freshman season and did reasonably well in soccer. She started every game and played almost every minute. However, playing soccer and going straight to track was a “lot for a body to take.”

The move paid off with All-American honors during the indoor season as a freshman and sophomore with some special times. She set a UK record in the 200-meter dash of 22.57 seconds at the SEC Indoors Championship — the world’s fastest time her sophomore year.

However, this year she’s been on fire. She won the 200-meter dash in a collegiate record time of 22.38 seconds at the NCAA Indoor Championships. It was the second-fastest indoors time in U.S. history behind only a 22.33 by Olympian Gwen Torrence and tied for fifth-fastest in world history. She had turned in a 22.52 earlier this season and also seen a new personal best in the 60-meter dash of 7.21 seconds, the nation’s sixth-best time this year.

Steiner had set goals for herself in September and posted them on a board in her room.

“I do visualize that, so when it happens it is not as much of a shock that you can do it. You have to believe you can do something before you can do it,” the Kentucky junior said.

She started her outdoor season April 16 at Florida by winning the 200 in 22.79 seconds, her sixth straight win in the 200, and 12th overall in that event as she aims for the SEC Outdoor Championships May 13-15.

“I am just taking things week by week. The conference championships and the NCAA will be coming up. Once the NCAA is over, I will stay in Eugene (Ore.) for the Olympic Trials,” Steiner said. “I am just excited to see how my indoor times translate outdoors.”

Steiner admits she had not really thought about the possibility of making an Olympic team until recently.

“Mainly because I didn’t start track and field until eighth grade and was not really serious about it until college. The Olympics are a more recent goal of mine,” she said.

She only started running in the eighth grade in Dublin, Ohio, because her friends were on the track team.

“All my friends were hanging out with each other. They were having fun running track and talked me into it just to come hang out and have fun,” Steiner, who didn’t lose any speed despite tearing her ACL before her junior year of high school, said. “I thought I would give track a shot. Why not? I was one of the fastest players on the soccer field and I could see how that could translate over to track, so that was another factor in me joining the track team.”

Never then did she think eventually she would give up soccer, her life-long sport, to concentrate on track like she did after her freshman year at Kentucky. She said one of the main reasons was because of the time commitment it took to do both sports.

“I struggled my freshman year devoting my entire year to being in season and traveling for both sports. It took away from my academics. My plan is to eventually be in physical therapy school,” Steiner said. “Normally I take harder classes in the off-season but I did not have time to do that because there was no off-season for me. I also honestly fell in love with track and field. I loved the coaches and my teammates.

“My freshman year I missed all the fall training for track and that is such an important piece to set up the season. I felt like I was playing catch up. I knew the times I ran in high school and my freshman year (at UK), so I thought if I was ever able to devote an entire year to track I was confident I could have more success.”

How good is UK commit Goodwin?