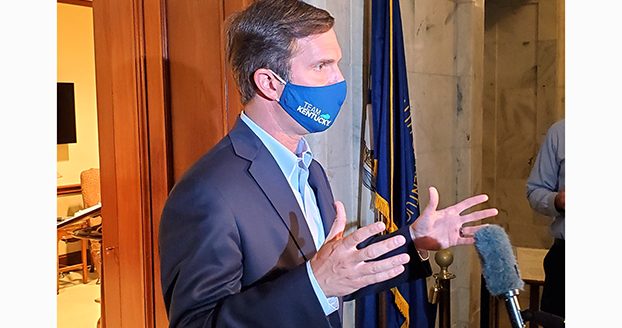 Gov. Andy Beshear announced he is relaxing some of the mask mandates that have been in effect since last July.

During a Monday afternoon media briefing at the Capitol, the governor stated starting Tuesday, “The mask mandate is no longer in effect for Kentuckians who are outdoors, at events of 1,000 people or less.  It is still in effect for events greater than 1,000.”

He said masks will still be needed for events like the Kentucky Derby this weekend, “But based on both where we are on vaccinations and what we have seen in recent data, it means if you are at a backyard barbecue, if you’re at your community pool, if you are at an outdoor wedding, especially if you are vaccinated, you are not required to wear a mask.”

Beshear noted, “We hope this is a relief for people, and remember, the state will be able to lift even more restrictions once the 2.5 million vaccine Team Kentucky Vaccination Challenge is reached.”

As of Monday, the governor said 1,726,346 people have received at least their first vaccination, which means there are 733,654 more needed for those additional restrictions to be removed.

There were 213 new cases of COVID-19 reported to state public health officials on Monday, marking the fourth consecutive day of declines.  There have now been 441,166 positive cases of the coronavirus, since the first one was confirmed in March 2020.

There were just three counties with a double-digit number of new cases.  Jefferson had 56, Daviess 15, and Fayette 14.

Four new deaths came to the state from local health departments: two in Jefferson County and one each in Hart in Henderson counties, with victims ranging in age from 55 to 92.  There were seven more from the ongoing audit of death certificates from last fall and winter, which means 6,459 Kentuckians have now lost their lives due to the coronavirus.

The state’s positivity rate stands at 3.15%, based on a seven-day rolling average of tests versus positive results.  That makes eight consecutive days of declines.

What did show an increase on Monday was the 414 Kentuckians hospitalized due to COVID-19.  Of them, 108 were in the ICU and 47 on a ventilator, both of which were also up from Sunday.

Due to this being Kentucky Derby week, the governor will not hold any more COVID-19 press briefings this week.  His office is expected to send out daily numbers.

Parks to get new playground equipment

By RANDY PATRICK Sun Reporter College Park will have a completely new playground this summer, thanks in part to a... read more