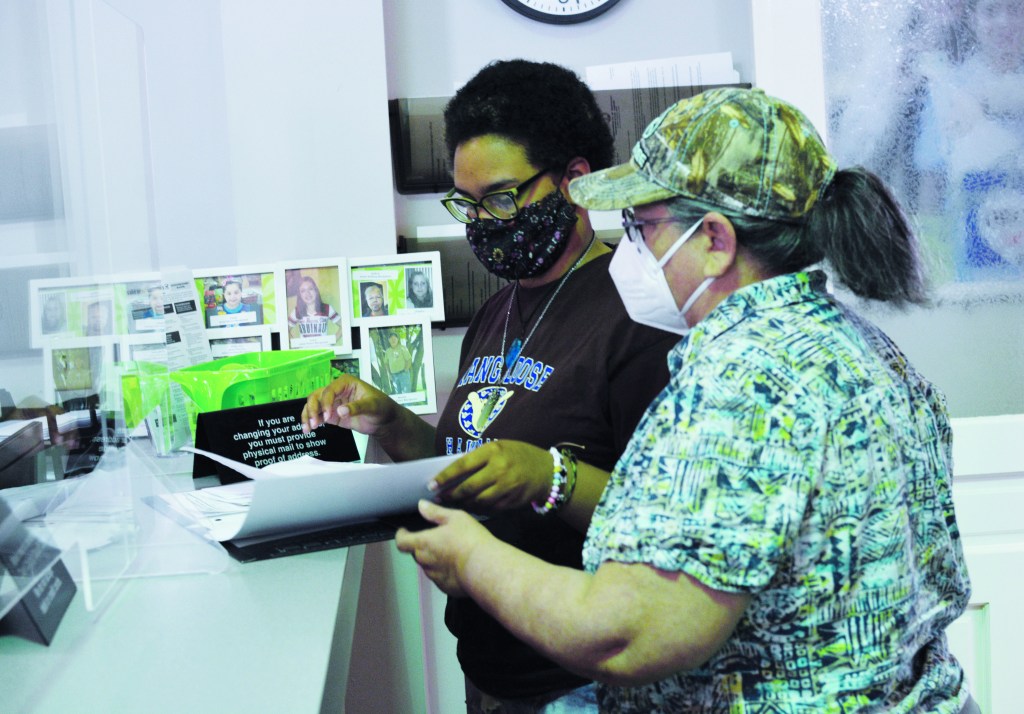 Fredtrice "Freddie" Lord-Scott, 17, and her grandmother, Frankie Townsend, look over her paperwork to get her learner's permit at the Clark Circuit Clerk's Office (Photo by Randy Patrick)

Last week Fredtrice “Freddie” Lord-Scott, 17, was with her grandmother, Frankie Townsend, at the Clark Circuit Clerk’s Office filling out paperwork to get her learner’s permit.

The teenager said she was excited but “a little nervous” because it was her second try.

Getting a driver’s license is a rite of passage for teens marked by anxiety and anticipation, but Freddie’s generation will be the last to go down to the courthouse, or in her case, the James Clark Judicial Center beside the courthouse, to get a license. Soon, driver’s licenses will be issued by regional offices of the Kentucky Transportation Cabinet.

“We were like 15th on the list originally, but I’ve not gotten a new update as to when we will actually be shut down,” she said.

Last week, the Governor’s Office announced that eight more circuit clerks’ offices were ceasing nearly all their in-person driver’s license services by May 24, bringing to 20 the number of counties that have made or soon will make the transition. By June 30, 2022, the new system is expected to be complete in all 120 counties.

Counties having already made the transition are Adair, Breathitt, Fayette, Floyd, Franklin, Hopkins, Madison, McCracken, Pulaski, Rowan, Russell, and Woodford, and the eight announced April 27 that will make the transition by May 24 are Caldwell, Casey, Green, Hardin, Menifee, Metcalfe, McCreary, and Webster counties.

According to the Governor’s Office, the reason for the transition is to provide a more modernized service that offers greater security for personal information and the credentials themselves.

“Kentucky’s system for driver license application, issuance and renewal is being taken to the next level with a network of driver licensing regional offices exclusively dedicated to licensing services,” Transportation Cabinet Secretary Jim Gray said in a statement.

Miller said she thinks cost savings may be a reason as well. The state was going to have to put expensive new equipment in all the clerks’ offices, and the clerks and deputies would have to be trained.

Miller said that under former Gov. Matt Bevin, there was a plan to have the county clerks’ offices issue licenses, which would have made sense to most people because the county clerk handles almost everything else having to do with cars, including issuing and renewing license plates, registering vehicle transfers, handicap placards and collecting taxes.

“They get a lot of our calls,” Miller said, referring to County Clerk Michelle Turner’s staff.

When county clerks didn’t want to take on the responsibility, and the state decided “they weren’t ready for it yet,” officials came up with the current plan to turn it over to the regional state transportation offices, she said.

For Clark County residents, the closest transportation offices will be in Lexington, Richmond and Morehead.

“It’s supposed to be out of the clerks’ hands by 2022, but I think that will probably be extended until 2023,” Miller said. “I think it’s been a bigger transition than the Department of Transportation expected.”

Part of what is driving the transition is the Homeland Security requirement to issue REAL ID cards, special driver’s licenses that people will need to board a plane, visit a military base or a correctional institution or other high-security locations unless they have a passport, military ID or other federal identification.

Residents may renew or apply for a REAL ID or new standard card version of driver licenses, permits, commercial driver licenses (CDLs) and ID cards at any Transportation Cabinet Driver Licensing Regional Office. Applicants may walk in, but are encouraged to make appointments online.

One temporary exception to the transition remains: Until June 30, 2021, the Office of Circuit Court Clerk in every county but Fayette will continue to process remotely submitted applications for renewal or replacement of standard-issue credentials, provided the card expires by that date and the applicant has not had a change of address or change of name and does not require testing performed by the Kentucky State Police. Remote renewal was a temporary, emergency measure directed by order of Gray to safeguard public health by limiting person-to-person contact during the COVID-19 pandemic.

Miller said the deadline for REAL ID was to have been Oct. 1 of this year, but that was extended because clerks’ offices are still limiting in-person visitation to those with appointments only.

Now, Miller said, “they have a little longer to get it.”

Last week, the U.S. Department of Homeland Security announced the deadline to obtain a REAL ID was extended from October 1, 2021, to May 3, 2023, due to the COVID-19 pandemic.

Shooter killed young mother, then himself