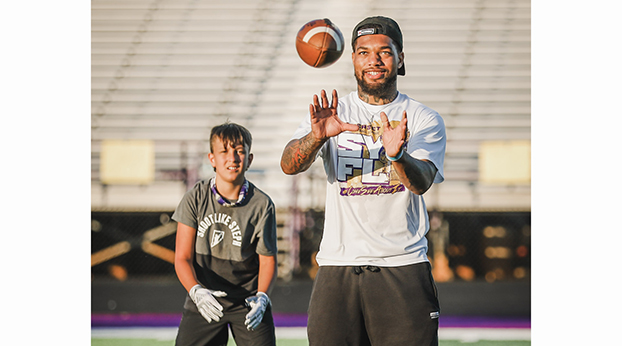 Lynn Bowden will return to Somerset for a second straight year to conduct a youth football camp. (Charlie Crawford Photo)

Bowden had already been picked by the Las Vegas Raiders in the NFL Draft but returned to Kentucky and was a huge hit at the camp.

“As he was leaving last year he said he would be glad to come back and do it again,” said Bart Williams, director of the Somerset Youth Football League. “I thought he was just being nice. But when we started planning we reached back out to his management team just in case he did want to come back. He got back immediately that he would absolutely love to come if we could work out the day.”

With no date in mind, it was easy for Williams and league officials to come up with a date — June 19 — to suit Bowden’s schedule.

“It was so easy. I will be honest, I was not sure what to expect when I reached out again this year,” Williams said. “If he was from here or the camp was in Lexington, it would be easier to understand him doing this. I am just tickled to death that he wanted to do it and we could work it out.

“He’s not asking for anything more than last year, so obviously it is not about the money with him. He was so engaging with the kids last year. He was out there laughing and going through drills with them. He was so sincere and nice.”

Bowden moved from receiver to quarterback midway through the 2019 season and rushed for 1,235 yards and 11 scores while also throwing for 330 yards and two touchdowns, including the winning pass in the Belk Bowl. He also had 348 receiving yards and 200 kickoff return yards to earn consensus All-American honors. He was also named the Paul Hornung Award winner as the nation’s best all-purpose player.

He was drafted in the third round by the Raiders but was traded early in the season to Miami. Bowden’s first significant playing time came in Week 14 against Kansas City when he had seven catches for 82 yards. He had four receptions for 41 yards against Cincinnati.

Kerri Brooks’ 9-year-old son attended the camp last year and will be back in June along with his 6-year-old brother.

“He loved it. Since his dad and I are involved in the planning, he has heard about this year’s camp from the beginning and he’s really excited,” Brooks said. “Lynn was awesome last year. He could not have been more down to earth with the kids. He will fly here and take a couple of days out of his schedule for what is not a lot of money to him. We are so thrilled to have him back.”

Registration for the camp is open at somersetyouthfootball.com/footballcamp until June 4th unless the camp fills up sooner. It’s open to incoming first through sixth graders. The camp is free for all Somerset Youth Football League players and $40 for the 50 spots available for non-league participants.

Last year due to COVID the camp was open only to Somerset Youth Football League players. Organizers wanted to keep the camp small so participants would have a chance to interact with Bowden.

“It would be great if we could do more, but we will cap out at 200,” Williams said. “Lynn is so genuine. We don’t want kids to feel rushed and not have a chance to meet him.”

Several Somerset High School players will help with the camp as well as coaches from the youth league, middle school, and high school.

“We will divide the kids up by grade but last year Lynn just went from group to group and got in the drills. He ran the obstacle course. He was just like a big kid,” Williams said. “He lined up and ran passing routes against a couple of high school kids. He threw a football with the kids.

“It was so refreshing. There was none of ‘I am not going to do that’ from him. He was all about the kids. It just speaks volumes about him and what kind of young man he really is that he is willing to come and do this again for our kids.”