Republican Sen. Rand Paul of Kentucky made fun of mask wearing by people who have been vaccinated for COVID, ridiculed President Biden for urging caution, and denounced Gov. Andy Beshear for his legal argument that public health orders are “inherent powers” of the state’s chief executive.

Paul, who said this week he is seeking a third term in the U.S. Senate, made his remarks at an event near Lexington and Nicholasville that was attended by about 60 people who weren’t wearing masks.

The Jessamine County Chamber of Commerce dessert gathering at Moonlight Fields Wedding Farm on Ashgrove Road was the senator’s last event of the day after he had visited Harrodsburg and Stanford. He is on a tour through Central Kentucky to meet with constituents and talk about issues, including public health restrictions, deficit spending and race.

“You may not have heard it but President Biden said that on July 4, if you’re with three people within your family, your immediate family, and you’ve been vaccinated, you can take your mask off for a few seconds,” Paul joked, exaggerating what the president had said about wearing masks in stadiums and other crowded outdoor venues but not needing to wear one at outdoor family gatherings after being fully vaccinated.

He also used a mocking tone to make fun of immunologist Dr. Anthony Fauci, head of the U.S. National Institute for Allergy and Infectious Diseases for wearing “two or three masks” after having had a second shot because he thought the vaccine might not be effective against coronavirus variants.

“If you look for people who are getting sick, hospitalized or dying from the virus after the vaccine or after natural infection, it’s close to zero. It’s not zero. But there’s not anything you do in life that’s zero risk,” Paul said. “But it’s a very reasonable risk, after you’ve been vaccinated, to not have to wear a mask and get out and enjoy yourself.”

Paul quoted Thomas Paine in calling government a “necessary evil,” and suggested that some politicians were “drunk with power.”

He targeted Beshear for what he considered excessive measures to try to slow the spread of the contagion that, as of Wednesday, has infected hundreds of thousands of Kentuckians and claimed the lives of more than 6,500.

Paul mentioned that the Kentucky legislature, which has veto-proof majorities in both the House and Senate, passed bills this year to restrict the governor’s emergency authority to protect public health, but the governor went to court to get an injunction, claiming that his orders were based on “inherent powers” that cannot be infringed upon by the legislative branch.

“That sounds like a recipe for tyranny,” the senator said. The argument that the legislature can’t limit the governor’s powers, he said, is ‘so far beyond the pale” that it is “dangerous” to “constitutional society.”

“We should be alarmed. I think this is the most important court case of all our time,” Paul said. “I’m worried about which way the court is going to rule,” he said, referring to the Kentucky Supreme Court, which he said has not been sympathetic to the legislature in past conflicts with the governor on the issue.

“I think maybe we need new people on the Supreme Court,” he said, reminding his listeners that the justices are elected, and suggesting that the Kentucky Constitution could be changed to limit the governor’s authority.

“I would support this even if the governor were a Republican. I don’t care what party they are, you cannot let one person have so much power,” he said. 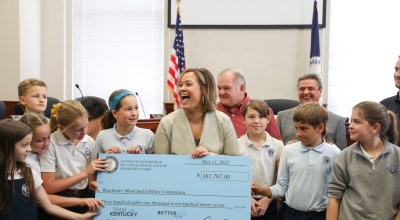 GRCHS graduation to be May 28