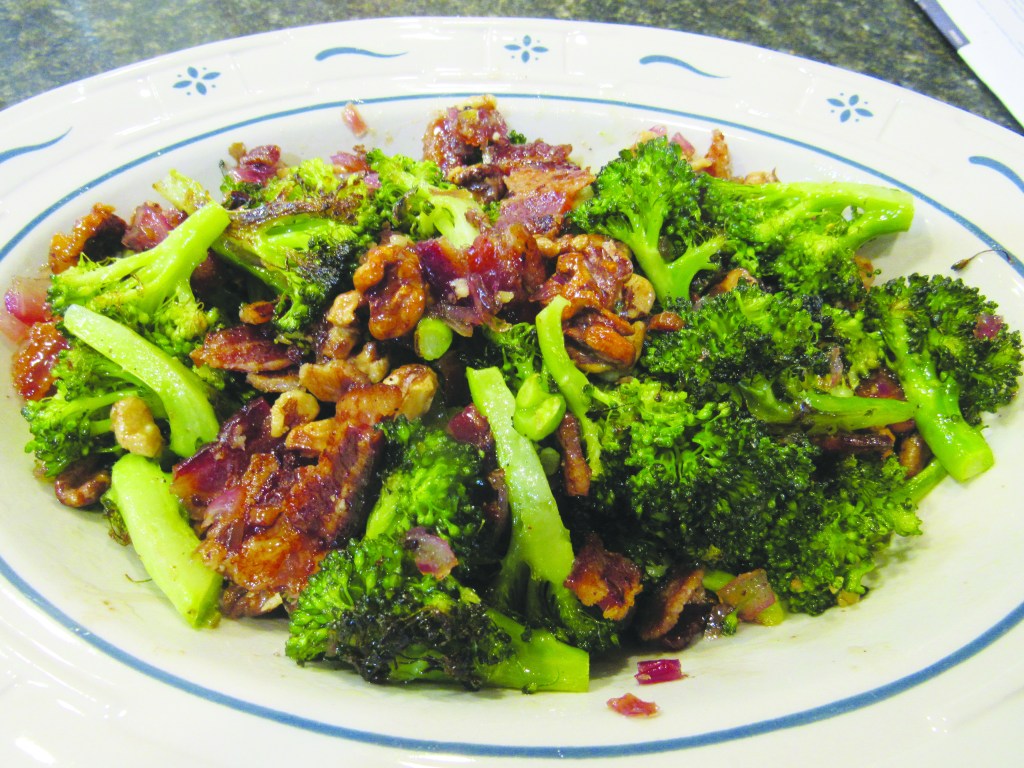 Preheat the oven to 400 degrees F.

Toss the broccoli together with the oil and sprinkle generously with salt and pepper. Spread the broccoli in an evenly spaced single layer onto a baking sheet.  Roast until the florets just begin to char and the stems have softened slightly, 15 to 20 minutes.

In the meantime, add the bacon to a small skillet over medium heat. Cook, stirring occasionally until the fat has rendered and the bacon is almost crispy, about 5 minutes. Add the onion to the skillet and cook until slightly softened, 2 to 3 minutes. Add the vinegar and sugar and stir until the sugar has dissolved, about 1 minute.

Add the roasted broccoli to a large bowl and pour the bacon dressing over the top along with the walnuts, tossing to coat.  Serve warm or at room temperature.

ust like I enjoy reading cookbooks, I like watching the Food Network. I see all types of food I’d like to try to make and I also see all kinds that I would not want to make. One morning I had the TV on just for the noise and Kardea Brown’s show, Delicious Miss Brown, came on. I enjoy watching her show because she seems so down to earth.  One of the dishes she was preparing that day was roasted broccoli salad with bacon dressing. You know it caught my attention when she mentioned bacon. We love bacon at our house; Brad especially loves it.  I stopped what I was doing and sat down to watch this episode of Miss Brown’s show.  While she was preparing this dish, I decided it was something I was going to try.  A couple of days later, before heading to the grocery, I went to the computer and pulled up foodnetwork.com and searched for this recipe.  In no time I’d printed the recipe out and added some of the ingredients to my grocery list.

Late that afternoon I started the prep work for supper.  I washed and trimmed the broccoli and cut it into bite size florets and set them aside.  I cooked the entire package of bacon in the oven and saved some of the drippings for the recipe.  I toasted some walnuts; unfortunately, the first batch got a little too toasty and I had to toss them.  I kept a closer eye on the second batch and they turned out just fine.  Once they cooled I coarsely chopped them.

When everything was prepped it was time to start cooking.  I sprinkled the olive oil, salt, and pepper on the broccoli florets and gave them a good toss to coat.  Then I poured the florets on a parchment paper lined baking sheet.  I lined the baking sheet for easy clean up afterward, but it’s not necessary to do that.  Into the oven the broccoli went and I began heating up the bacon drippings in a medium size skillet.  When the drippings were warm I added the chopped onion to the skillet and cooked it  until it was softened, but not mushy or caramelized.  I poured in the vinegar and the sugar and stirred until the sugar dissolved.  I turned the skillet to low and let the mixture simmer until the broccoli came out of the oven.

Brad blessed the food and we dug in.  We ate and ate till our bellies were full and then I asked Brad what he thought of the new broccoli dish.  He said he thought it was really good and I agreed.  It was delicious and I could have eaten what remained in the bowl, but decided that wasn’t a good idea since I was already stuffed.  However, I did reheat it the next night and it was just as good the second time as it was the first.

This recipe definitely falls into the nailed it category and it will be added to my self-made cook book.  I’ve already added broccoli to my grocery list and am looking forward to having this again real soon.