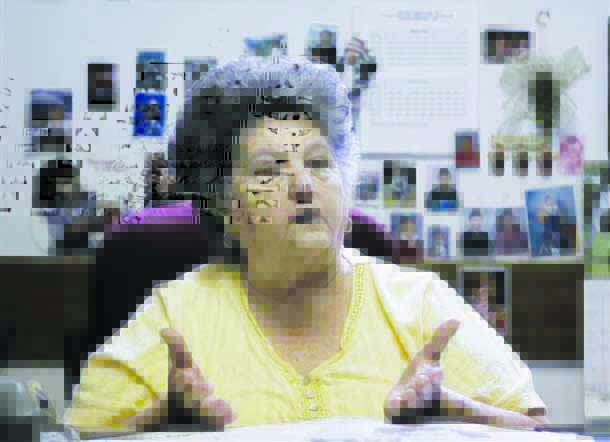 Eula Hall, founder of the Mud Creek Clinic near Grethel, Ky., talks about presidential candidate John Edwards in her office Monday, July 16, 2007. Hall was a 41-year-old mother of four when Robert F. Kennedy stopped in Prestonsburg. She didn't get a chance to hear him speak, but she says the problems today are nearly as bad as they were then. "We didn't have running water, we didn't have a clinic, no black lung compensation," said Hall. "We still have poverty, a lack of jobs, education and affordable health care." (AP Photo/Ed Reinke)

Eula Hall, a self-described “hillbilly activist” and a health care pioneer in the eastern Kentucky mountains for decades, died Saturday morning. She was 93.

Nearly 50 years ago, Hall founded the Mud Creek Clinic in Floyd County with $1,400 in donations in 1973. It is now known as the Eula Hall Health Center and is operated by Big Sandy Health Care. She worked until her death.

“She was among the toughest women I’ve ever met, overcoming one challenge after another to serve those who had nowhere else to turn. Even after a fire burned down the clinic, her team didn’t miss a single day. Slowing down was simply never an option,” said Sen. Minority Leader Mitch McConnell in a statement. “When we spoke on the phone just a couple of weeks ago, Eula’s entire focus remained on those she could help.”

In 2006, the Kentucky General Assembly passed a resolution renaming Kentucky Highway 979 – the road that runs through Mud Creek – “Eula Hall Highway” in her honor. She was inducted into the University of Kentucky’s College of Public Health Hall of Fame in 2010.

“Eula Hall poured everything she had into the Mud Creek Clinic, devoting her entire adult life to the support and medical care of Southeastern Kentuckians,” McConnell said. “In a facility that now bears her name, this self-described ‘hillbilly activist’ forever changed the lives of her patients, neighbors, and friends.”

Hall was lauded by many dignitaries, receiving letters from President George H.W. Bush, McConnell and Congressman Hal Rogers for her ongoing efforts and dedication to helping the need in eastern and southeastern Kentucky.

“Eula Hall was one of Eastern Kentucky’s greatest saints,” U.S. Rep. Hal Rogers, longtime representative of the region, said in a statement. “No challenge was greater than her courage to change the circumstances of healthcare in the mountains. Driven by her own experience with poverty, Eula dedicated her life to ensuring every person had access to medical care, regardless of their ability to pay for services or prescriptions.”

The accoolades poured in on Saturday.

“Since Eula opened her doors nearly 50 years ago, she blessed her community and our entire commonwealth with care and a generous spirit,” McConnell said. “Eula never craved the spotlight, even as she gained fans and praise nationwide. She was a lifelong champion of her people and will remain an inspiration for years to come. Elaine and I share our heartfelt condolences with her colleagues, family, and the many admirers of this one-of-a-kind Kentuckian.”

Floyd County Attorney Ned Pillersdorf sent out a tweet about Hall after learning of her death that succintly summed the great loss for those in Appalachia she served.

“Eula is gone. Appalachia has lost the best friend the poverty stricken have ever had,” he tweeted.

When she was 90, she told reporters she would keep working.

Funeral arrangements are being handled by Hall Funeral Home in Martin.