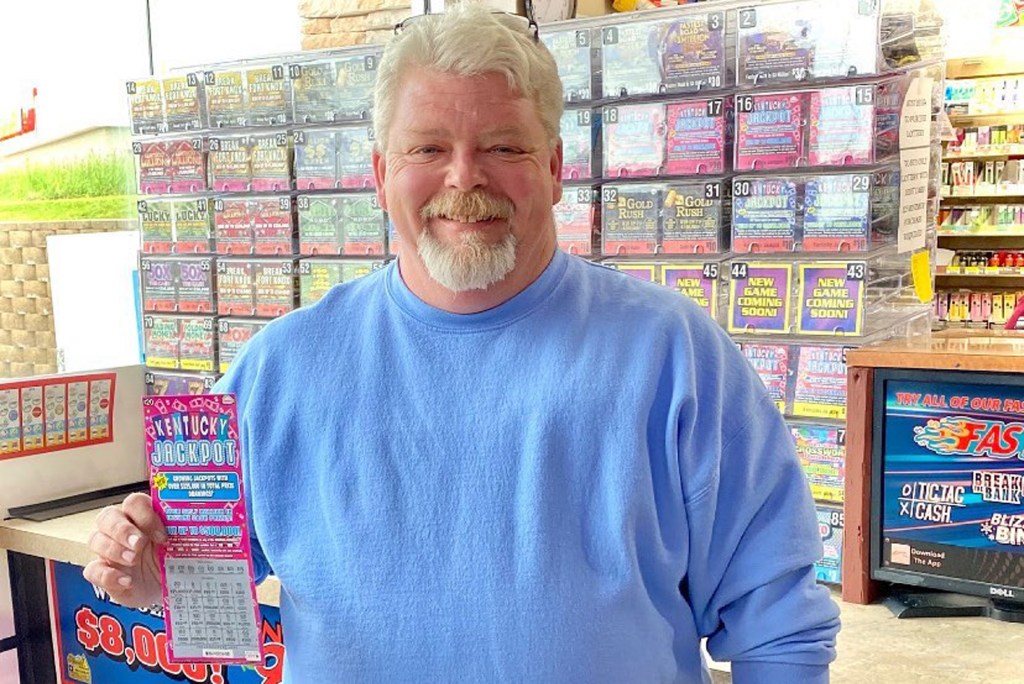 Bobby Wolfe is a half-million-dollar winner in the Kentucky Jackpot lottery game. Gasoline Alley in Winchester, which sold the winning ticket, posted his picture on Facebook.

Bobby Wolfe couldn’t believe his own eyes when he started scratching off the ticket and more and more zeroes kept showing up.

The Winchester resident had gone to Gasoline Alley Friday with a friend to play Keno, something he does a couple of times a week. He doesn’t usually buy scratch-off tickets out of the machine, he said, but this time he did. It was the last ticket on the roll, and it was the lucky one.

He took it home and broke the news to his mother, who lives with him.

“I told Mom, ‘I’m pretty sure I’ve won a half million dollars,’ and she said, ‘Bobby, that’s such a blessing,’ and then she started crying,’” he said.

Wolfe said he was a little nervous because he had the ticket at his house all weekend, locked in his gun safe until he could drive to the Kentucky Lottery headquarters in Louisville and cash it in for $355,000, his winnings after taxes.

Because of COVID, he said, it was entirely a curbside transaction.

Unlike many lottery winners, Wolfe didn’t do anything wild with the money. Instead, he got out of debt.

“I paid everything off,” he said.

“I’ve worked hard all my life,” he said, and it feels good to be in the clear. “It’s just a blessing,” he said.

Wolfe is a distributor for Little Debbie snack cakes, and last Christmas Day he joined Robert Pritchett of Bargains on Broadway and other volunteers in providing a free hot turkey dinner to anyone who was hungry or had no place else to go.

It seems everybody knows, he said.

Gasoline Alley posted Wolfe’s picture on its Facebook page with the words, “Bobby got lucky!” Just before 5 p.m., the post had 225 shares.

The convenience store at 105 April Way got lucky, too. They’ll get $5,000 for selling the winning ticket, although the Kentucky Lottery hasn’t said yet how much it will be.