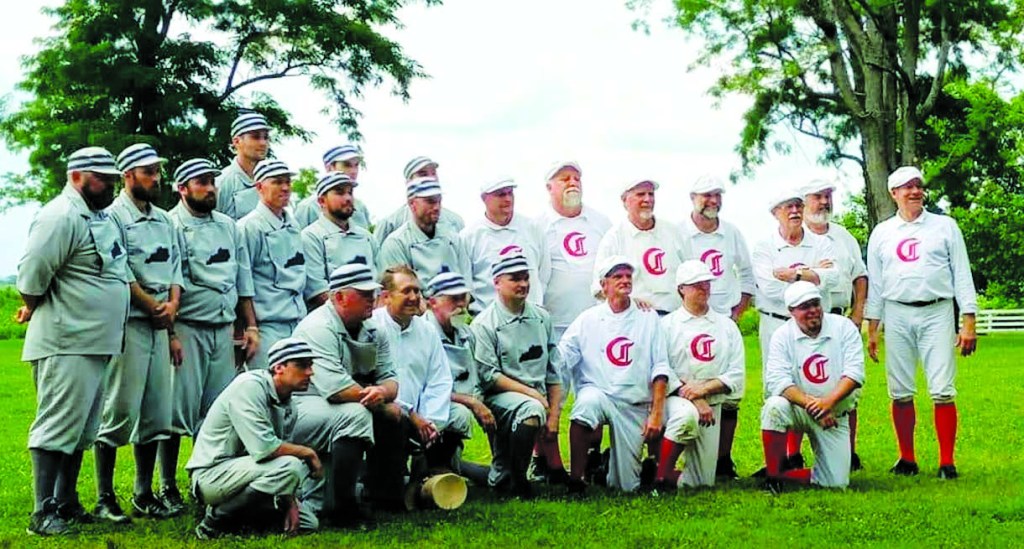 Vintage baseball teams to clash in double-header on May 16

The Bluegrass Barons Vintage Base Ball Club and the Cincinnati Reds Hall of Fame 1869 Red Stockings will resume their rivalry with a double-header at Waveland State Historic Site in Lexington, Ky., at 1:00 p.m. on Sunday, May 16.

Fresh off a pair of wins against the Springfield, Illinois, Long Nine, the Bluegrass Barons have been Kentucky’s only vintage baseball team.  They play according to the rules of baseball in 1869.  Pitchers must throw underhanded and fielders must make plays barehanded, since gloves were not allowed until much later.  Teams wear uniforms in the style of the 1870s, and the games recreate the way baseball was originally played.

The Red Stockings and Bluegrass Barons are frequent opponents, playing each other several times per season.  The two teams have played each other at several locations, including Great American Ballpark in Cincinnati, Whitaker Bank Ballpark in Lexington, and Shaker Village near Harrodsburg, Ky.  In the virus-shortened 2020 season, the Bluegrass Barons won the season-series against the Red Stockings 2-1.  Sunday’s matches will be their first meeting in 2021.

Admission to Bluegrass Barons vintage baseball games at Waveland is free this season.  Attendees are encouraged to bring lawn chairs, and Boston’s Way food truck will have food and beverages for sale.  Social distancing and masks are strongly encouraged.

Waveland State Historic Site is the home field of the Bluegrass Barons Vintage Base Ball Club.  It is the former home of Daniel Boone Bryan, a descendant of pioneer Daniel Boone.  The mansion was built between 1844-1848, and it has been part of the Kentucky State Parks since 1957.  Waveland is located at 225 Waveland Museum Lane, Lexington, KY, 40514.

While vintage baseball teams play for the love of the game, the spirit of competition is very much alive as both teams try their hardest to win.  Crowds are entertained with the excitement of barehanded baseball which respects the gentlemanly traditions of the game.