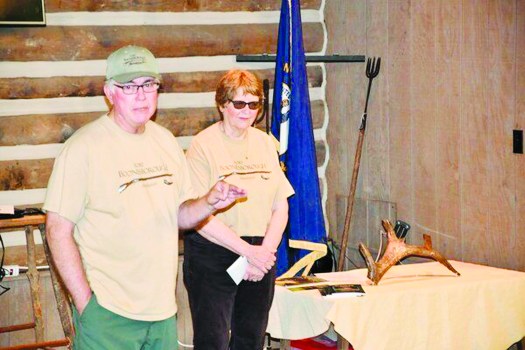 George and Elizabeth Chalfant of Winchester, members of the Fort Boonesborough Foundation, have had the elk antler carbon dated to determine it is from the 18th century, but there is no way of knowing whether Daniel Boone really carved his name on it. (Richmond Register photo) 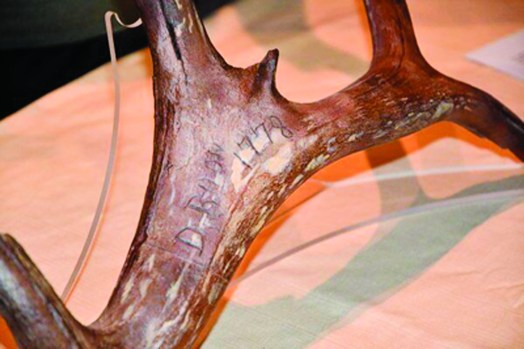 The Langston family found this 18th century elk antler in the Hinkston Creek area of Bourbon County. It has an inscription that may or may not have been carved by Daniel Boone, who was a a notoriously poor speller. (Richmond Register photo)

For decades, generations of the Langston family took an odd heirloom to their school’s show and tell days.

Andra Gyor recalled the days she, and her now adult son, Langston, both proudly displayed before their peers what appeared to be a large horn, or antler, with an interesting inscription: “D BOON 1778.”

Years ago, the antler was discovered by a distant family relative in a tributary near Hinkston Creek in Bourbon County.

The family kept the elk antler and thought the inscription was carved by famous Kentucky frontiersman Daniel Boone — who is known to have traveled Hinkston Creek many times.

In 2017, Janice Langston and her daughter, Andra, donated the elk antler to friends George and Elizabeth Chalfant of the Fort Boonesborough Foundation to see if they could find out more information about their unique family heirloom.

On Saturday, after working “untold hours” and nearly three years on researching the antler and its origin, members of the Langston family, the Chalfants, and members of the foundation gathered at Fort Boonesborough to celebrate the unveiling of the exhibit that features the antler.

“This is a project that just kind of started,” Elizabeth Chalfant said.

She said she was working one day for her other business and happened to tell Janice Langston about her work at Boonesborough.

“She told me that next time we come down, she has a horn she wants us to look at,” Elizabeth Chalfant recalled. “Working with Fort Boonesborough, when you hear ‘a horn,’ you think of a powder horn.”

When she and George met with the Langstons weeks later, Elizabeth Chalfant said her husband pulled the horn out of a large black garbage bag and exclaimed, “This is an antler! And look what it has carved on it.”

“That is where it all started,” Elizabeth Chalfant said with a laugh. “We thought, ‘This is really going to be good.’”

Once they received the donation in August 2017, both Chalfants said the antler became a huge part of their life — working closely with the foundation to learn as much as possible about the artifact.

Along with the Rocky Mountain Elk Foundation, George Chalfant was able to obtain a grant to help carbon date the antler.

The carbon dating data revealed the antler belonged to an 18th century extinct subspecies of elk of that time period, which corresponded with the date on the carving.

Although elk have been reintroduced to Kentucky in recent years, they are of a different subspecies than the 18th century elk which is now extinct.

“There is no other artifact in Kentucky like this, even without the carving,” George Chalfant said.

However, the curious carving was the reason the family held onto the bone, and kept it for all the years they did — ultimately preserving it for thousands to see.

“It is amazing how an old bone found on the creek has made it this far,” George Chalfant said on Saturday. “Without the carving, the antler may have just been lost. But with it, the family kept this.”

Although Daniel Boone is said to have been in the Hinkston Creek area a lot in his travels, and would have been around that time, experts said it would be impossible to confirm if Boone did in fact carve the etching into the bone.

Despite the mystery of who actually killed the elk and carved D Boon into the piece, the antler and a replica of it are now located at Fort Boonesborough State Park for the public to view.

After investing so much research into the antler and Kentucky elk, George Chalfant also authored a publication, “The Historic Elk Antler,” available at the 18th Century Transylvania Store where the original antler is located.

“The hours are untold,” Elizabeth Chalfant said of the research into the antler. “The investigating, looking up things, talking to people, and hours at the computer, are untold. But it was worth every minute.”