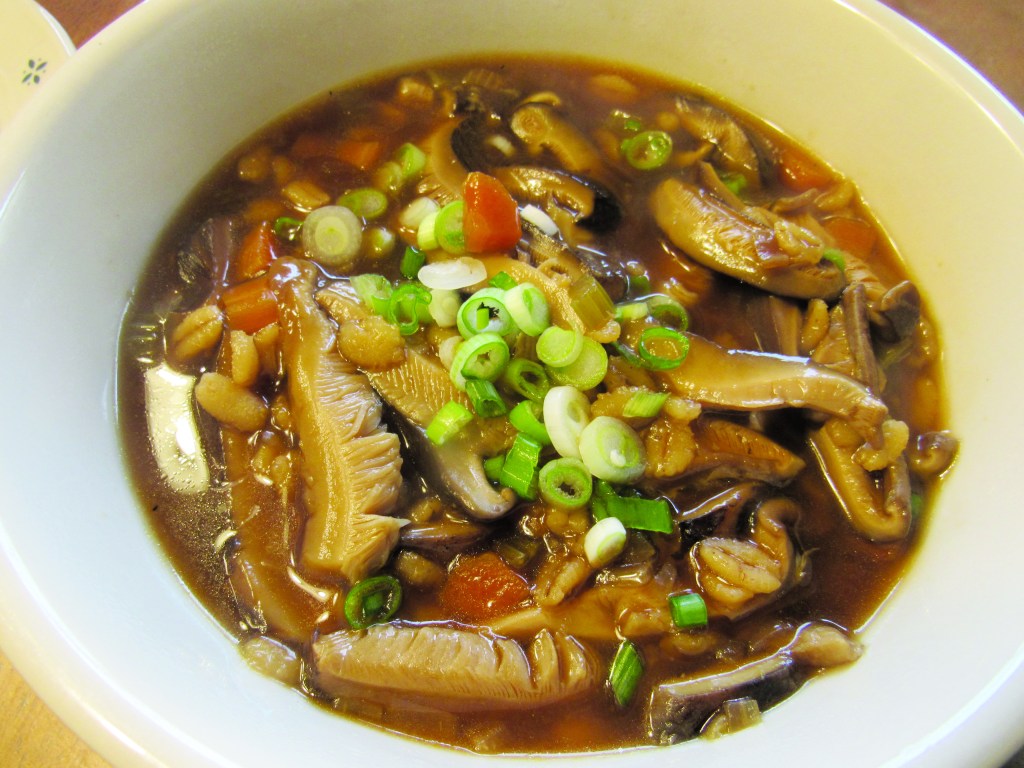 In a large stockpot, melt butter over medium heat. Add onion, carrot, and celery, and cook for 10 to 12 minutes or until tender. Stir in mushrooms, garlic, and ginger; cook for one to two minutes or just until fragrant. Stir in broth and next 5 ingredients, and bring to a boil. Reduce heat to medium-low, cover, and cook for 1 hour. Stir in green onion just before serving.

As you know, Brad grows shiitake mushrooms. The weather has been perfect for them to pop out of the inoculated logs that are on our little farm, and we’ve had a few mushrooms over the last few weeks.  We’ve sold some, dried some, and Brad has eaten some.

Since I love to clip and save recipes, there are some shiitake ones I’ve collected just waiting for the right time.  The right time was when we had enough of them to make the recipe, and when I was in the mood to prepare the dish.

One of the recipes I copied from the September/October 2014 issue of Cooking with Paula Deen was a recipe for shiitake mushroom and barley soup. Even though it’s spring, it feels like soup weather to me, and I thought I’d surprise Brad with this soup at supper time, even tough I don’t like mushrooms (we had some leftover chili in the refrigerator, and that would be just fine for me that evening).

I didn’t have all the ingredients called for in this recipe so I headed to the grocery to pick up beef broth, pearl barley, and green onions. The only pearl barley I could find on the shelf was the quick type and I hoped it would work.

Late that afternoon I read the recipe instructions and then gathered all the ingredients for making the soup.  The recipe calls for 2 pounds of shiitake mushrooms and that’s a lot of mushrooms.  Since I wasn’t sure Brad would like this soup, I opted to cut the recipe in half.  I destemmed and sliced up almost a pound of shiitake’s, chopped all the vegetables, and turned on the stove.

Into my pot went the butter and once it was melted, I added the onion, carrot, and celery. Those veggies cooked for about 15 minutes then I added the mushrooms, garlic, and ginger. After about four minutes, I poured in the broth, water, soy sauce, barley, salt, and black pepper. The soup came to a boil and I turned the heat down and let the pot simmer for an hour.  I was hoping the quick barley would work and not get too mushy.

While the soup simmered, I thinly sliced the green onion and sat it aside for the soups garnish.

Brad liked the soup, but he said he isn’t crazy about beef broth so next time he’d prefer I use chicken broth instead. He also commented that a whole pound of mushrooms wasn’t needed.  He thought a little more than half would be sufficient. So, keep that in mind if you decide to tackle this soup. By the way, the quick pearl barley worked fine.

Our neighbor, Rachel, likes shiitake mushrooms so we decided to share some soup with her. She thought the soup had a great flavor but she is trying to watch her sodium intake and said it was a bit too salty for her diet. Note:  I used regular soy sauce instead of low sodium and don’t know if that played a part or not – the soup was not too salty for Brad’s taste.

Per Brad, this recipe is a Nailed It, so it will be adding it to my self-made cook book. He’s looking forward to harvesting mushrooms in the near future so he can have this soup again.