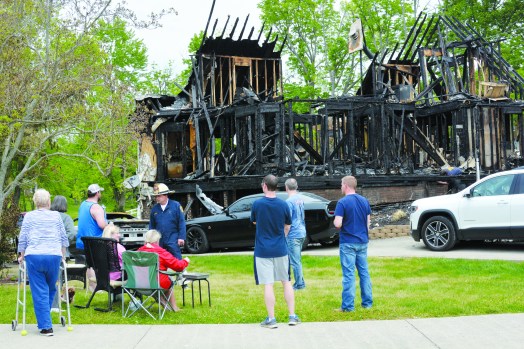 Evan and Andi Welch, surrounded by friends, talk with Maj. Chris Smith of the Clark County Fire Department Monday about the fire that destroyed their home Saturday morning. (Photo by Randy Patrick) 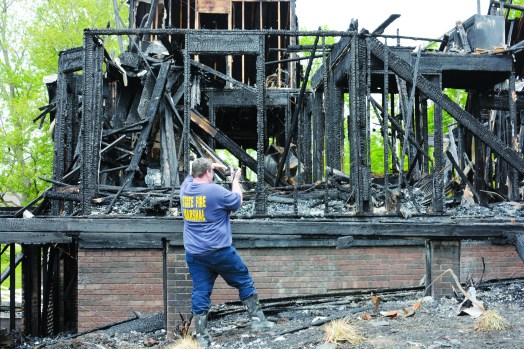 Jerry Brush of the State Fire Marshal's Office investigates the scene of a fire at 116 Steve Court that destroyed the home of Ratliff family Saturday morning. (Photo by Randy Patrick)

An early morning fire Saturday destroyed a house near Old Boonesboro Road and damaged two others, but the residents all escaped.

Battalion Chief Will Jordan of the Clark County Fire Department said firefighters got the call from dispatch at 5:11 a.m. and arrived to find the house “fully involved.” The house on one side of it was also on fire, and the fire melted the siding of the one on the other side.

The house that burned down at 116 Steve Court off Shanahan Lane was the home of Evan and Andrea (Andi) Ratliff and their three young children — Kadan, 11, Addison, 9, and Alexis, 6. The father was able to get the kids out of bed and save them, Jordan said, but he was burned in the attempt.

Andi and her mother and brother, who were staying with them, Sherry Fuller and Ben Collins, also made it out safely before firefighters arrived, Jordan said.

The battalion chief said the injured — the father and two daughters — were taken by Winchester Fire-EMS ambulances to Clark Regional Medical Center and were released the same day.

The family’s dog, a German shepherd, perished in the fire.

On Monday, Maj. Chris Smith of the Clark County Fire Department and Jerry Brush of the State Fire Marshal’s Office were on the property investigating the damage and trying to determine the cause of the fire. They interviewed the owners of the house, who were in the front yard of their neighbors’ house, surrounded by other people.

“He heard the smoke alarm and said he got up and saw fire on the front porch,” Jordan said.

The fire appeared to have originated at the front of the house on the first floor, but firefighters have not yet determined the cause, Jordan said.

“All we know from the looks of it is that it started outside, around the front porch area,” Evan Ratliff said. “But that’s not written in stone. When I ran outside, the front of the house was on fire, and the roof of the front porch.”

“The smoke alarm is what alerted us … and by the time the smoke alarm woke us up, the whole front of the house was in flames,” he said.

Evan said he had run outside to try to use the garden hose on the flames, but the fire was raging by that time and he knew there was nothing he could do except try to get his family out.

“I was lucky and blessed that I was able to get my children and family out. That’s the most important thing,” he said. “I did lose my dog. He was a good family dog.”

The loss of the German shepherd was hard on the kids, the couple said.

The other house that was on fire when firefighters arrived had some damage to the attic and a broken window, but the family did not have to move out. The other house had only exterior damage.

Five vehicles and a camper were also damaged.

Jordan said he thinks the Ratliffs are staying with  relatives.

The Clark County Firefighters Association, Jordan said, is collecting clothes and personal items for them.

The fire is under investigation.