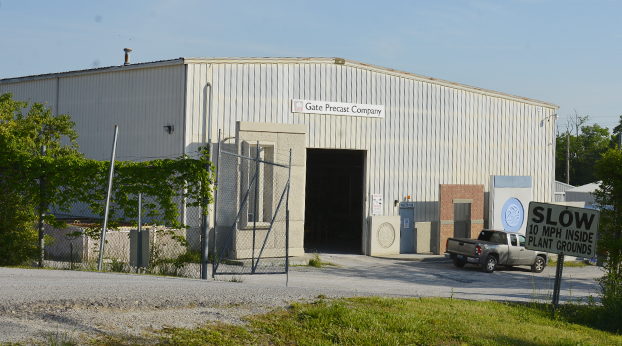 Gate Precast, which has been manufacturing prefabricated concrete in Winchester for decades, announced recently it will close its local plant and merge its operations with a plant in Tennessee. (Photo by Randy Patrick)

Gate Precast, one of Winchester’s oldest manufacturers, is closing.

Mayor Ed Burtner shared that information with other city officials at a Board of Commissioners meeting Tuesday afternoon by reading from a letter from the vice president of operations, Steve Schweitzer.

“Gate announced this week that its manufacturing plant will be closing due to market conditions,” Schweitzer wrote. “The construction industry has not rebounded as expected after the COVID shutdown, and future operations for work in the Midwest is limited.”

According to Rolando Thacker, business services manager for the Kentucky Career Center’s Bluegrass Local Workforce office, the company will be laying off 40 workers in June, so the state agency will be conducting a rapid response session June 1 at the plant to provide information to the employees affected.

Burtner said he had learned that the layoffs, more specifically, would involve 20 employees in the next four weeks and 22 more after that, leaving 24 employees in the engineering and office areas.

The company, which manufactures prefabricated concrete for structures, will be consolidating its Winchester operations with those at another of its nine locations, in Ashland City, Tenn., according to Schweitzer, but the letter does not say when that will happen.

The plant at 101 N. Seventh St. in Winchester began in the mid-1970s as Bluegrass ArtCast, and for the past 25 years has been Gate Precast.

Todd Denham, executive director of the Winchester Industrial Development Authority, was disappointed to hear about the closure and the layoffs.

“It’s always tough to lose an industry that has been in your community for so long” and provided so much, he said. “Gate Precast will be missed.”

The closing is also “a hard hit to those employees that might lose their livelihoods,” Denham said, adding that the community will do everything it can to help them find other jobs here or nearby.

There is quite a bit of hiring happening now among Winchester’s industries, he said. Infiltrator currently has a need for 55 employees.

“Just about everybody’s hiring,” he said, including Leggett & Platt, Catalent, Univance. “There’s so many out there looking for people.”

“I think there’s a lot of opportunities out there for people who want to work,” Denham added.

Seventh Street project
Gate’s heavy truck traffic on Seventh, a narrow residential street, was one of the main reasons for the city’s current top priority state transportation project, the extension of Seventh Street to Maple Street and Veterans Parkway near Interstate 64. However, truck traffic to another nearby company, the Freeman Corporation on Magnolia Street, was also a major factor.
During the meeting Tuesday, Burtner said he had discussed the matter with other city officials, and he wants to continue with the $4 million extension.
“We have a contract with the Department of Highways. … I think we need to move forward with the project,” he said.
He also said he doesn’t know what Gate plans to do with the property once it closes the plant.
The city was asked by the state Transportation Cabinet to match state funding with $800,000 of its own money but was allowed to reduce that amount to $300,000 by using $500,000 from discretionary funds in the state’s Rural and Secondary Road Program as part of its match.
The extension has been on the city’s priority list for more than 30 years.
Residents have complained that big trucks crowd cars on the narrow street, stir up dust, and are noisy.
There were some residents there at the meeting Tuesday, but they had no comment except for one man who asked a question about the possible closing of the railroad crossing on Seventh Street.
Brian Ward of Palmer Engineering, said that typically when a railroad allows a new crossing, it wants to close three, and with a planned new crossing between Freeman and Gate Precast, the existing crossing could be closed. Negotiations are currently underway with the railroad, he said.
“We expect that to be resolved in the next month or so,” he said.
Ward said that roadway design for the Seventh Street Extension is complete, the right-of-way plan is complete, and the utilities relocation plan is nearly complete. Environmental and archaeological studies are also in process, he said.